Home ENTERTAINMENT Movie Review: A Day In The Life 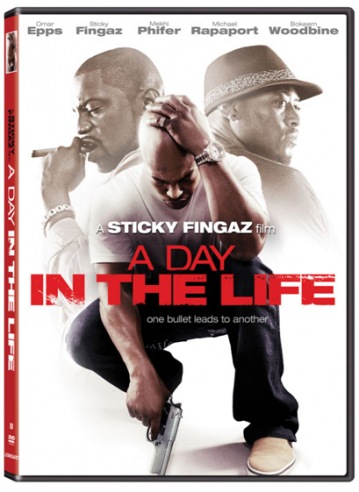 The 411: A DAY IN THE LIFE is an action-packed urban thriller with a decidedly unconventional operatic conceit. Told entirely through rap, the story begins with a young man by the name of Stick (Kirk “Sticky Fingaz” Jones) deciding he wants out of the street life. When two members of opposing crime families are gunned down, Stick finds himself caught in the middle of an explosive blood bath. Soon, hes faced with a decision of loyalty or a new beginning.

The Good: The points I appreciated with this movie was that it goes where no other movie of its kind has gone! It made an action-packed urban thriller where the dialogue is performed entirely in rap. Kirk “Sticky Fingaz” Jones tried to do something new and special and I believe he made a pretty good movie. “A Day In The Life” takes you into the life of gang member and what happens when things just go bad.You will love this movie if you like movies with lots of gun shooting because that is what this movie is all about. Seeing who could fire off enough bullets in the least amount of time.

The Bad: This movie is made for an audience that appreciates “urban gangster movies” and especially rap music. This is not “High School Musical” and they don’t try to be that either. My question is “how much of an audience does the movie have?’ I’m sure they lost alot because it is done completely in rap.

The Last Word: The movie is your typical “gangster movie” which we’ve have seen before and we will again! The only thing that makes Mr. Jones’ directorial debut any different is the dialoge is completely in rap. If you like these kind of movies, then you’ll really enjoy this independent movie set in Los Angeles.

Theater, DVD, or Cable in a few years: If you’re a fan of this kind of genre, it will be a great movie to watch. If you’re not a fan of a “gangster musical”, then you may want to wait until it hits cable in a few months.