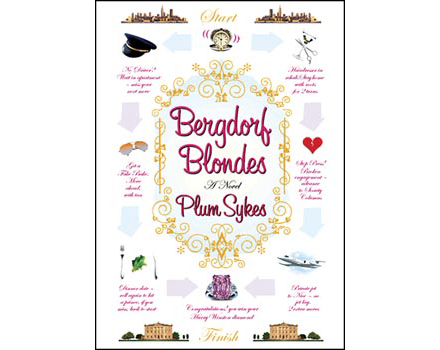 I’ve been a fan of Plum Sykes for awhile. I followed Runway as the chronicled her wedding, I noted with glee her cameo in the Sex and The City movie, but oddly, her book, Bergdorf Blondes sat on my shelf for three years. Oddly, I received a call from a friend of mine a few months back, who said ” Oh, I’m reading Bergdorf Blondes and it reminds me of you! “ Hmm,” thought I. “I only wish… I wish my days as a finishing school girl in New York City were still here.” I remember my best friend (born and raised in Beverly Hills) and I had no clue about money.We would spend as only two Sarah Lawrence girls out on a romp could. “sighhhh” Anyway, I finally removed the book from my shelf and began to read. Like all things that feel “like Home” I couldn’t put it down. Bergdorf Blondes is an ersatz, modern day, Jane Austin novel to my mind. I did love it. Sykes’s writing is witty, smart, and quite female in thought pattern. The characters emerge from frivolous, image based, existing into thoughtful, determined, goodhearted heroines. OK, so the object was to marry a rich guy. In the end, noting that who someone is as a person counts far more than flash, coolness, and facade, each finds Mr. Right The main characters could not go forward until they self actualized and stopped focusing on the external. Somewhere it dawned on them that like attracts like and in order to find a good guy, they had to be good gals. Nice read.