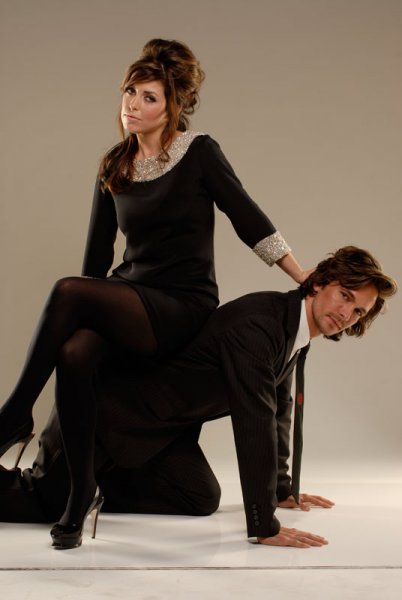 Bobbie Thomas is a seriously busy gal, so getting the time to chat with her is no small thing. If she’s not covering red carpet festivities for E! Entertainment or doing a segment for The Today Show, the New York- based senior editor for In Touch magazine is hopping cross country on a PR campaign for Gillette’s Venus Embrace razor or partaking in charity events like the PGA’s Justin Timberlake Shriners Hospital for Children Open in Las Vegas.

This latest red circle on the calendar left an impression on the effervescent hip chick, who found herself in her favorite place working alongside Timberlake’s mother, Lynn: talking to women about women’s issues while helping them improve everyday areas of their lives through her endless stockpile of beauty and fashion trends and tips.

But what about the other side of the ever-widening sex divide? Sure, many women would be curious to learn about how they can fall back in love with their old favorite clothes and update their image while doing so, but can Thomas’s insights extend to the majority of fashion-backward guys who prefer sweats to suits and think only of boxing when they hear Oscar de la Renta? Let’s see:

KL: Generally speaking, what are women looking for in a guy they are getting to know concerning his style?

BT: It’s really basic, but the first thing guys need to do is just be clean. Dirt under the fingernails, dandruff, hands that are cracking with dryness; all of these things can be taken care of to make sure that your basic appearance is sound. Smell should be obvious, but don’t put on cologne right before a date; it’s usually too much at that point and should be put on earlier in the day. Don’t forget the other senses, like touch. Is a girl going to want to kiss you if your lips are all dry and cracking? I don’t think so.

KL: Ok, so the basic hygiene is out of the way; what about fashion and style?

BT: I put it this way for men: how would you feel about a girl you’re taking out if she shows up with a stain on her blouse or her clothes are all wrinkled? This is basic stuff, but some guys don’t know that lint and pet hair on your clothes gets noticed. As far as fashion goes, I think a guy’s best option is to have one of his friend’s girlfriends help him out. A guy’s personal fashion should be a mystery for the girl; I don’t want to play ‘dress up’ or have to tell my man what he should wear. It’s like asking someone what they want for their birthday and wrapping the present; I’ve never understood that. There needs to be an element of individuality that is backed up by what he’s wearing.

KL: What do you mean by a guy ‘backing up’ what he’s wearing?

BT: Women love fashion because of the possibilities it gives us with different appearances; it allows us to experiment with our look. With guys, fashion is more intimate, in that the outside matches the inside; for men this is more important. It’s great if you want to wear plaid pants and an orange crush t-shirt, just make sure the look fits, and know the kind of people you’re going to attract. There’s nothing more uncomfortable when you’re talking to a guy with multiple piercings and tattoos who speaks in whispers and lives with his mom. Guys need to reflect who they are on the inside with how they appear- more so, in my opinion, than women.

KL: How can a guy decide which look he wants to put out there if he’s unsure?

BT: Catalogs target lifestyle, and there are thousands of clothing catalogs out there. If you’re a guy looking to get new clothes, I suggest finding a catalog with a look you identify with the most.

BT: When guys are most attractive is when they’re at a sports bar or game: women get to see their real personalities, without all the posturing and fakeness that goes with trying to impress someone. Women love seeing men in their element, and sports is one way to do that. Guys need to hang out in the shoe department to see what I’m talking about! Also, remember that when you’re out with your friends, be engaged with the group you’re with. Other people will find that attractive and want to come meet you. It’s a turnoff when guys are hanging out with each other, not talking to one another but just checking out girls.

KL: You got any tests that guys need to pass in order to meet your intellectual requirements?

BT: It really depends on who you’re looking to attract, but it’s nice when someone’s connected to current events. It’s difficult to converse if you don’t have hold on what’s happening around you. I think men and women both want someone smart, but they really want heart; I don’t care if you’re a garbage man, but I care if you’re passionate about your work.

KL: Give me your five absolute deal-breakers:

2- Trying too hard when it’s negative, being disingenuous.

3- Not being polite; manners are important.

5- I’m not into metro-sexual, effeminate men. I still need a ‘guy’.

KL: Thanks so much Bobby! We’ve learned a lot today…

BT: It was a pleasure. I hope it helped!