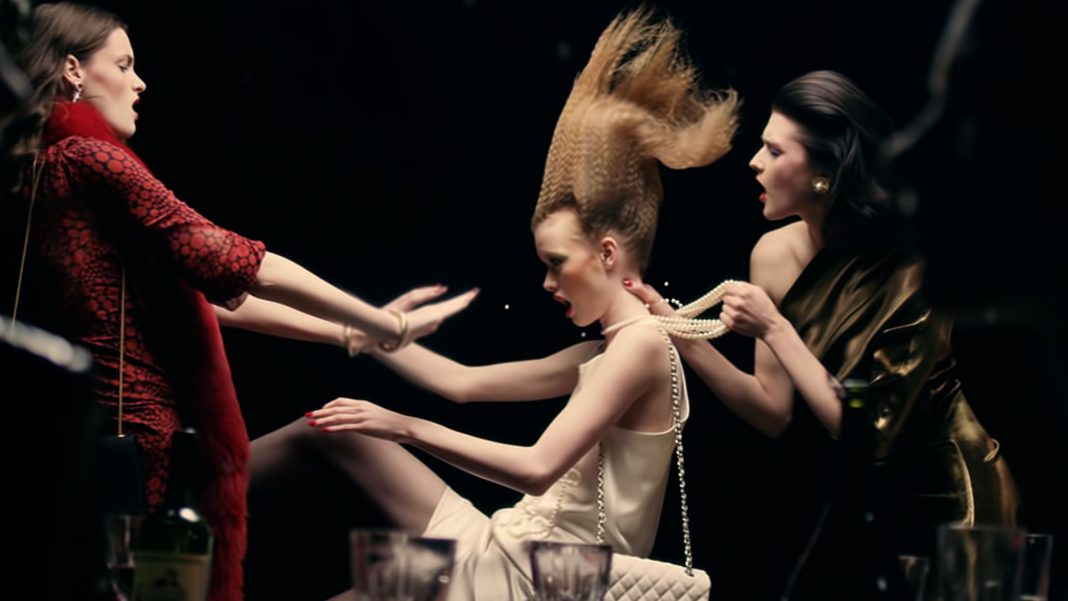 1. “The New Fragrance” by Spike Jonze for Kenzo

Directed by Spike Jonze, Kenzo’s latest film captures a night spent with actress and model Margaret Qualley. Once again, the Kenzo protagonist is portrayed not as a mere amalgamation of connoted ideals, instead Qualley’s movements are jarring, conflicting with the rest of the mise-en-scene as she shoots lazer beams from her finger tips and flies. Flooding the building with the dancehall sounds of Sam Spiegel, Ape Drums and Assassin, Kenzo chose not to attempt to translate the olfactory into the visual and the campaign is stronger for it. Neither sexually charged nor ostentatiously aspirational, the film is unusual for a perfume ad — which is perhaps why it is so successful as a fashion film.

2. “Wolves” by Steven Klein for Balmain

Doubling as the music video for Kanye West’s track “Wolves”, Balmain’s latest video campaign features West and Kim Kardashian-West alongside musical collaborators Sia and Vic Mensa — and a legion of recognisable faces, including Jourdan Dunn, Joan Smalls and Jon Kortajarena. Not shying away from the exuberance of the brand, the symbiosis of Olivier Rousteing’s physical creations and West’s music creates an impactful and entertaining experience. Directed by Steven Klein, the film bears resemblance to more conventional fashion films, but its freshness lies not in cementing some novel aesthetic vision but rather the synergy between two cultural brands. Reflected by its reach, with over 15 million views on Youtube, “Wolves” success springs from the film’s legitimacy as a standalone piece of entertainment.

The New York-based cult skater brand continues to hold steadfast to its roots, promoting the product in action through a high velocity edit of real skaters practicing their craft. The latest installment of Supreme’s skate videos, “King Puppy” opens to the old school sounds of East Coast hip-hop duo Gang Starr as a pitbull chews on a shoe with the skate team watching on. Sage Elsesser, a familiar face in the Supreme circles, ollies over the roots of a tree. Nike SB heavyweight Grant Taylor shows off his gravity-defying moves in the bowl. Directed by William Strobeck for the Supreme/Nike SB Blazer GT Collection, “King Puppy” is about the collaboration of the two brands, Nike and Supreme, but it’s also about the physical interaction between both brand’s skating teams — and nowhere does Supreme lose sight of that.

Alessandro Michele is a master of overstimulation, and this season’s Gucci film is perfectly reflective of that. Directed by Glen Luchford, with creative direction from Michele and art direction by Christopher Simmonds, the video is a psychedelic experience shot in the urban metropolis of Tokyo. Transitioning from a calm teahouse to the pulsating streets of Shibuya, shot by shot Michele’s creations seamlessly blend into the background. Flashing lights engulf the models; bubbles fly across the screen; more than an interpretation of the clothes, the video becomes an extension of Gucci’s collection, while the use of subtitles in the film reflect a visual motif already present in the brand’s most recent print campaign.

5. “The Love with Which I Wash” by Harley Weir for Wales Bonner

Directed by Harley Weir, “The Love with Which I Wash” captures a journey through India, from Delhi to Junagadh. Challenging ideals of Western masculinity, the film places Wales Bonner’s unique vision of manhood in new context. Adorned in her garments, these anonymous faces supplant conventional images of the European machismo. Enriched by traditional images of India — laundry by the Ganges, glimmering dress in dance — Wales Bonner’s creations become animated under this new light. The photographer’s off-beat realism and her ability to find the romantic in the mundane, through unexpected camera shots and composition, elevate the video-journal into a memorable artistic endeavour.

6. “The Tale of Thomas Burberry” by Asif Kapadia for Burberry

Condensing 160 years into three and a half minutes, “The Tale of Thomas Burberry” reimagines an alternate timeline of the British fashion house’s history through the perspective of its founder. Directed by Academy Award-winner Asif Kapadia and starring the likes of Domhnall Gleeson and Sienna Miller, Burberry’s video is modelled after a Hollywood film trailer. The viewer is guided through a narrative of emotive vignettes, from the flight of the Burberry racer, to Shackleton’s ill-fated Artic-expedition and the trenches of the Great War. In an approach characteristically espoused by media conglomerates, Burberry’s film promotes no physical goods, but rather a vision and story for the consumer to experience — where the brand and the man come together.

7. “The Seven Deadly Sins of Edward Enninful” by Nick Knight for Showstudio and Beats

To honour the acclaimed stylist’s 25 years in fashion, SHOWStudio and Beats collaborate to exhibit “The Seven Deadly Sins of Edward Enninful.” Directed by Nick Knight, the film explores the seven biblical sins through seven audio-visual combinations. Premiering on the Beats billboard in Times Square, the experience is fittingly unreserved and maximalist. In thirteen thrilling minutes, the faces of Kate Moss, Naomi Campbell, and Karlie Kloss, amongst others, are all manipulated digitally, while the sounds of Future, Jamie XX, and Kaytranada fall in waves, crashing down on the visuals. Featuring garments by Céline, Vetements and Yohji Yamamoto, among others, Enninful’s genius is celebrated in an amalgamation of our two essential senses: sight and sound.

Shot by Director X, the #WANGF16 campaign chronicles the lavish lifestyle of a social set partying in a Beverly Hills mansion. Reminiscent of an early-2000’s rap video, the film stars the likes of Big Sean and Skrillex, alongside Zoë Kravitz, Kylie Jenner and Binx Walton. However, through dynamic camera movement, slow-motion effects and an impactful soundtrack, the film is never reliant upon its cast to maintain interest. With X reverting to his comfort zone as a music video director, the film is a celebration of the off duty cool-kid star-power that has become so associated with Wang’s brand in the last ten years.

In another collaboration with a prolific music video director, Marc Jacobs taps into the expertise of Hype Williams this season, creating a dynamic moving portrait of the unique faces featured in Jacob’s beautifully strange campaign. As lights and sounds blend in front of a completely black background, the neon-lit video gives dynamism to the inherently static garments. More than a stale reinvention of still editorials, the film performs a function. Serving as a prequel to the campaign, we are introduced one by one to Jacob’s legion of campaign stars — coming face to face with the likes of Anna Cleveland, Cara Delevingne, and Marilyn Manson, the dispersed cultural figures that Jacobs believes represent both the era we live in and the brand he has built.

Unlike conventional athletic wear advertisements, which tend to be limited to praising the impact of sports-technology on athletic performance, Adidas Football’s “Blah Blah Blah” focuses not on the act of playing sport, but rather on the elements that draw sporting fans to the phenomenon in the first place. With a gaze upon the cultural context that informs the football community, Adidas’s film succeeds by connecting fans with the struggles of their idols. Combining animation with live-action, “Blah Blah Blah” is another example of the sporting world’s increasing investment and interest in the fashion film medium.