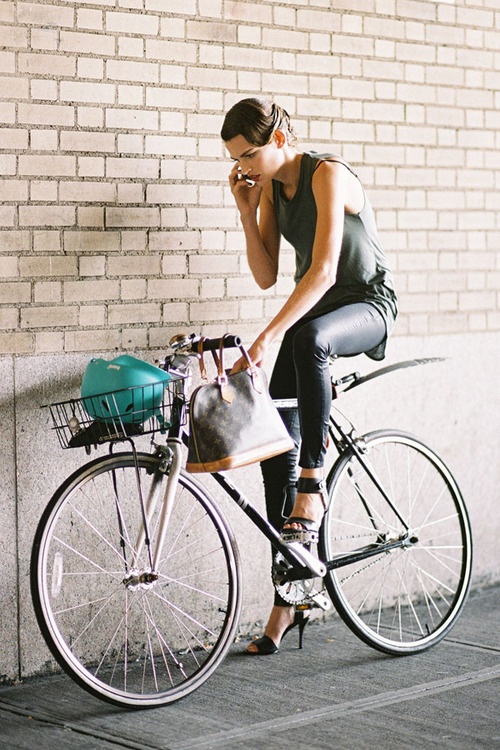 The Best Bike Picks for the Summer Cycler

Dating back to 1885, the time of its creation, the bicycle has been the main type of transportation in many regions of the world and still is today. Not only is a bicycle a greener mode of transportation it is also great exercise. Like any of life’s accessories, if you know how to shop, your bicycle can be your most fabulousaccouterment and your greatest tool outside of your gym bag. With many varieties to explore, I will take you on a tour of some of the options when it comes to finding the right bicycle for not only your personal style type, but your regions terrain as well.

For The Commuter: The Road Bike
The most popular type of bike when shopping for the general casual biker, the perfect fit would be the road bike. The road bike, built for traveling at medium to high speeds on paved roads, are built less for fast bursts of speed and more for endurance and long distances when using them to commute or use for exercise. The road bike typically has more gear combinations, similar to a mountain bike and less high tech features making them user-friendly. Tires are usually narrower and high-pressure, rocky or uneven terrain is usually unadvised.

For The Adventurer: The Mountain Bike
Another popular type of bike is the mountain bike. While many consumers will purchase a mountain bike as their day-to-day transport bike, the mountain bike was designed for off-road cycling. Much like how the Jeep was made to standout against other SUV’s in the automobile world. Generally, mountain bikes can be classified into four categories based on suspension: Rigid, hard tail, soft tail and full. This is important to inquire about when shopping because it will give the consumer insight on how the suspension handles, and how the wheels move. The mountain bike is made for the unpaved environment and therefor used mostly for sport and exercise over general transportation. Mountain bikes differ from road bikes in many ways. First being the larger tires made for gripping rocks and gravel. Second, their brakes are made to be more powerful than a general street bike, and possess lower gear ratios for steeper pathways that have poor traction.

For The Athlete: The Racing Bike
The racing bike is the standout star athlete in the group. Sleek, lightweight and lightning fast these beautiful bikes are built for speed. Competitive bike racing is a widely popular sport, athletes look for the best of the best when purchasing their bicycles. Unlike the bells and whistles of the mountain and road bikes, these bikes have minimal accessories, drop handlebars and narrow tires. The handlebar design allows for a riding position that is aerodynamic and the gear range is minimal. This allows the bike to operate at optimum efficiency. Carbon fiber is used in the higher end models of the racing category and makes for a very lightweight model.

For The Casual Rider: The Beach Cruiser
The beach cruiser is built for style, and my personal favorite. Unlike their lightweight counterparts, the beach cruiser is built with a heavy frame and designed for comfort over performance. Padded seats and curved back handlebars allow the rider to sit comfortably and ride with ease. The cruiser model was the bike standard throughout America in the 40’s and 50’s. Traditionally, beach cruisers operate on a single speed and have easy brakes. Today you are able to find models with up to seven speeds, and the introduction of the use of aluminum to design them have made them lighter weight than what they once were. Most popularly seen near the beaches, riding along the boardwalks, beach cruisers are available worldwide.

For The Happy Couple:
The tandem bicycle, introduced in 1898, was developed to allow multiple riders to use one bicycle together as transportation. Now used in not only casual biking but racing as well, the tandem bicycle is still popular and relevant today. A popular vacation rental, you can sit two (or more) individuals, one in front of the other, and cruise. In comparison to a traditional one-seat bicycle, the tandem bike has double the pedaling power, as two individuals work together. It does however possess the same wind resistance and weighs less than twice as much as a single weighs. With those factors taken into consideration, a tandem cycle can reach higher speeds faster than a single rider bike making it a good choice for someone who wants to get around quicker, and who loves company.