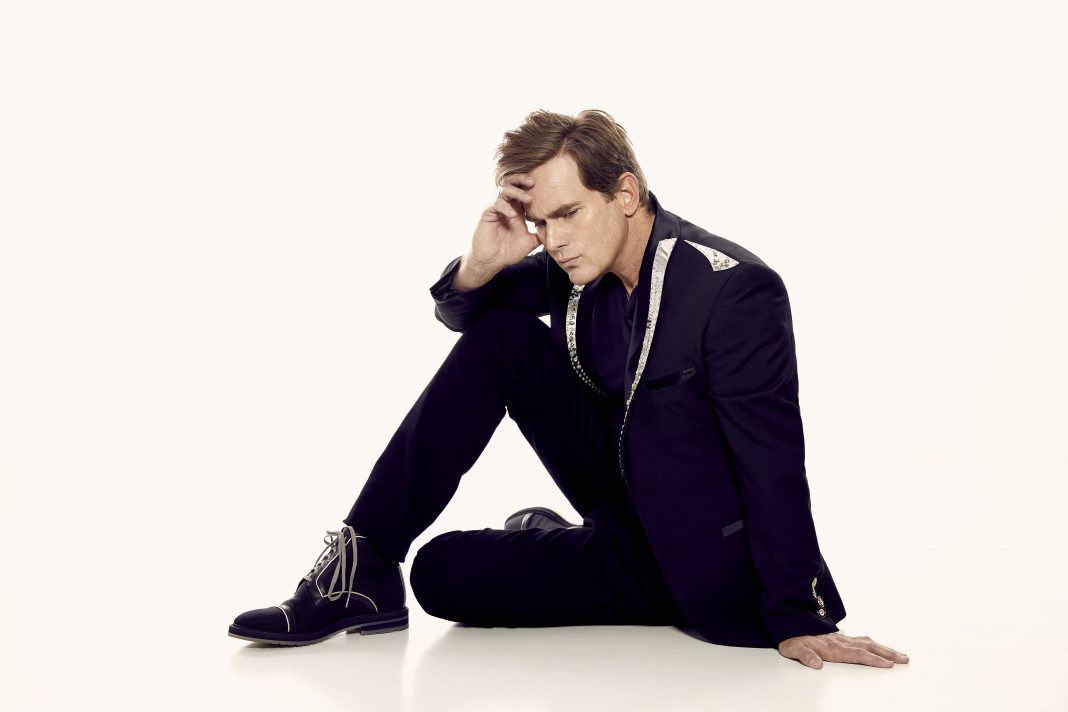 What are you up to these days?

I just finished looping a film I shot in early November. Other than that, I’m concentrating on getting myself back into fighting shape. Between seasons or jobs, I like skiing, golfing, surfing, swimming, and yoga. I’m also getting back into the saddle because I feel like horseback riding is a valuable skill. But I’m also looking to develop my own acting opportunities during down time. Creation and recreation sometimes go together.

What designers are you into this season?

It’s hard for me to drive past the Paul Smith store, and that’s more true than ever in 2018. But I’m also finding some fun things coming from Orlebar Brown and Bonobos. For casual, everyday wear, Wil Stiles has short sleeve shirts that don’t make me look like a tourist.  I think the Fred Perry slim fit polos manage to be both laid back and dressy enough for a dinner out in Palm Springs (depending on what you wear with them!). If I were in my twenties though, I’d probably go broke at Gucci right now. I wandered into one of their stores the other day, and it put a big smile on my face. For jeans, I’m loving the way my A.G.s Matchbox fit.

What is your favorite pair of shoes?

I’m tempted to say the orange pair of Swims I probably wear way too much, because those are the ones people notice and, as an actor, I sometimes like a little attention. But, my absolute favorite footwear are these boots from Taft – black wool and leather – that give me style without being in any way uncomfortable. And who doesn’t need a great pair of black shoes?

In addition to all the sports, I’m an avid collector of Pan Am memorabilia: posters, badges, china from first class, menus, blankets, dozens and dozens of uniforms, matchbooks, travel bags, decks of cards, historical records, designs of the jets, you name it! As someone who used to fly for Pan Am, I have an attachment to the company that is both professional and deeply personal. It’s the job during which you might say I came of age. Collecting bits and pieces of Pan Am is a bit like sorting through my youth. It also helps me remember that I was lucky enough to be a small part of a great story.

Tell us about your time at UCLA?

I went to college in my thirties. It was interesting being surrounded by younger people all the time, but odds are I was a lot more focused on learning than I would have been in my twenties (when I couldn’t resist invitations to parties and nightclubs). I found writing papers extraordinarily difficult. I would almost rather swim with sharks than compose another essay. I ended up getting two degrees, one in history and one in art history. I have a recurring nightmare where a UCLA administrator pulls me out of class and says, “We’re very sorry, but we made a mistake and you shouldn’t be here.” I think that pretty well covers how I felt about myself during that time. I grew up in financially challenging conditions and neither of my parents had ever gone to college. Getting those degrees helped me realize I could do more than I thought I could. It gave me the courage to try acting, which was something I had wanted to do all my life.

What is it like doing so many episodes? What are the challenges?

Filming over two hundred hours of television and playing the same character means you have to keep finding ways to make it fresh without stepping outside the lines you established in the beginning. Also, actors mostly learn the job in public. The hardest thing on earth is leaving the set knowing – absolutely certain – that you didn’t do as well as you would have liked. You have to accept it very fast, and come back in the next day, let go of all your internal criticism, and give it your best shot again.  If you’re lucky, and you try hard, you get better as you go along. I put my whole heart into the role of Buzz Watson, and I hope I made the most of the opportunity. The last thing I’ll say is that I am nothing at all like Buzz, but I will always be grateful to him. That sounds odd, but it’s the truth.

What is your favorite suit?

You would have to knock me unconscious to take one of my Paul Smith’s from my closet, but my favorite suit is a bespoke number I helped design using elements available at Klein Epstein Parker. They custom make every part of the garment according to your own measurements and specifications. And I love the way people react to it.

I’m not a jewelry person, although I’ve given in a bit to the bracelet trend. I admit to liking a Deco inspired Bulova and a Rip Curl I wear surfing. Is that too low end? I have a Mont Blanc for dressier moments but, honestly, I don’t like to wear watches at formal events because I hate to be seen checking the time. And I will!

Tell us about your home front.

I’m married and we divide our time between L.A. and the desert. We also love traveling to Europe – when practical – and New York during the fall or spring – if we can get a good rate on a nice room. No children, but four godsons and two goddaughters, and they really do make up an important part of our daily routine. In addition to family, we have a lot of Closer/Major Crimes alumni in our lives, plus a large circle of extended friends. We are lucky, lucky, lucky. I am at a place where my needs are mostly easily met, I’m in great health, and my biggest challenge is how to achieve artistic goals. Oh. And how to convince my husband to separate his laundry from his dry cleaning. I want to believe he’s trying, but after living with him for twenty-five years, I’m beginning to have doubts.

Do you do any charity work?

I don’t think of it as charity work, exactly, because that’s mainly done by the people who run these amazing foundations, but I volunteer a lot with the Sunshine Kids, a group that brings children battling cancer together so that they can meet other youngsters fighting the same fight. We take them to Disneyland, help them get sworn in as police officers for a day, and go with them to the beach. Working with the Sunshine kids is an amazing experience. G.W. Bailey, who played Lt. Provenza, is the President of their foundation, and J.K. Simmons, who played Asst. Chief Pope in The Closer is their spokesperson. I also contribute to Covenant House and their mission to help young homeless kids. And I’m on the Director of Communications for the Board of the Pan Am Museum Foundation, which presents exhibits at the Cradle of Aviation Museum on Long Island.

Where can we find you on social media?