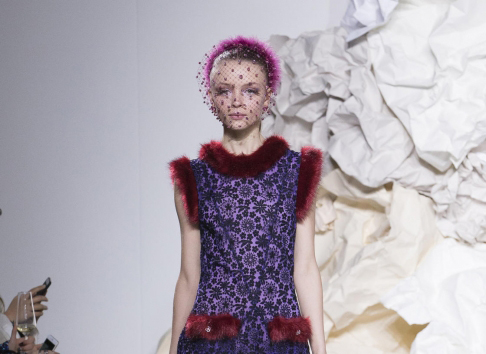 Recent news that the Hong Kong government is to plough HK$200 million into the creative sector coincided with the biannual international catwalk shows in New York and Europe.

In London and Paris, Hong Kong and Chinese graduates from the European art college system are already receiving help to showcase their collections, from organizations such as the British Fashion Council and the talent-spotting Fashion Scout that champions young creative talent. The British fashion industry and government funding underwrite both organizations.

Yifang Wan and Xiao Li are both previous Fashion Scout merit award winners, and Youjia Jin, originally from Inner Mongolia, says Fashion Scout gave her a “priceless opportunity” to launch her career after graduating by selecting her as one of its Ones to Watch designers.

Jin also designs men’s clothes, and is regarded as one of the mainland’s top 10 menswear designers. There is a distinct blend of masculine tailoring and feminine sensibility in her womenswear collections.

The girlish appeal of Ryan Lo’s flamboyant style, meanwhile, was recognised by New Gen which funded his first catwalk show last month in London. The New Gen showcase is one of the most internationally recognized talent spotting schemes, and has been sponsored by Top shop since 2001. Its alumni include Huishan Zhang, whose fresh and exciting vision of femininity they were quick to identify four years ago. Zhang who works in London and produces his collection in Qingdao, now has a coveted spot on the schedule on the same day as Burberry, Erdem and Christopher Kane. Always delving into his cultural roots, this season Zhang created Chinese puzzles of velvet and tweed spliced with lace, and traditional Chinese warrior-like dresses using hologram sequins.

Before being snapped up by New Gen, the Hong Kong-born Lo was supported for two seasons by Fashion East a non-profit initiative founded in East London that gives young designers the opportunity to showcase their collections in London and Paris. 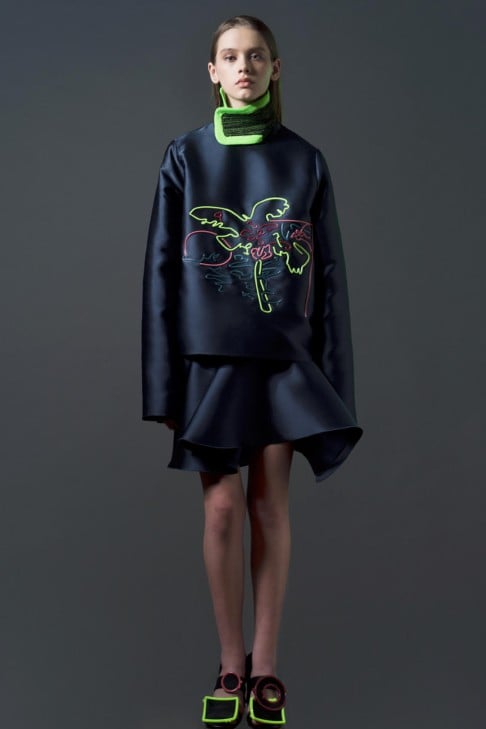 An outfit by Minki Cheng

London-based Xiao Li, who graduated with an MA from the Royal College of Art, won the Diesel Award in 2013. She was showcased by Vogue Talents at Milan Fashion Week last year and is one of the shortlisted semi-finalists for the prestigious LVMH Young Fashion Designer Prize.

“Vogue Talents 2014 gave me an excellent chance to show my work in front of the ‘Vogue’ family and industry people from all over the world,” says Li, and Fashion Scout “supported me too, giving me my first opportunity to show during London Fashion Week”.

She also receives support from the Chinese fashion industry and “there are plenty of opportunities for young designers” there.

These Hong Kong and mainland designers are graduates of the British fashion school system – three-quarters of the postgraduates on the London College of Fashion’s MA course this year are Chinese and many elect to stay. To do so they have to launch their businesses in Britain to secure a visa, which makes them eligible for support.

Hong Kong-born Minki Cheng, who showed his second collection at London Fashion Week, is a Central Saint Martin’s alumni and former staffer at the Alexander McQueen studio. He says being selected by the British Fashion Council “has certainly given me motivation to do even better next season”.

London’s creative buzz is clearly important to all these designers. Renli Su, who hails from Fujian, graduated with an MA from London College of Fashion three years ago and showed her fourth collection in the same group as Cheng. Her label sells in Shanghai, Beijing, Changsha and in independent boutiques in Britain.

While Hong Kong can claim to be a multicultural city, it needs to offer better support not just from government but retailers and the fashion-buying public to encourage these young creatives to come back from the dynamic fashion capitals of Europe.