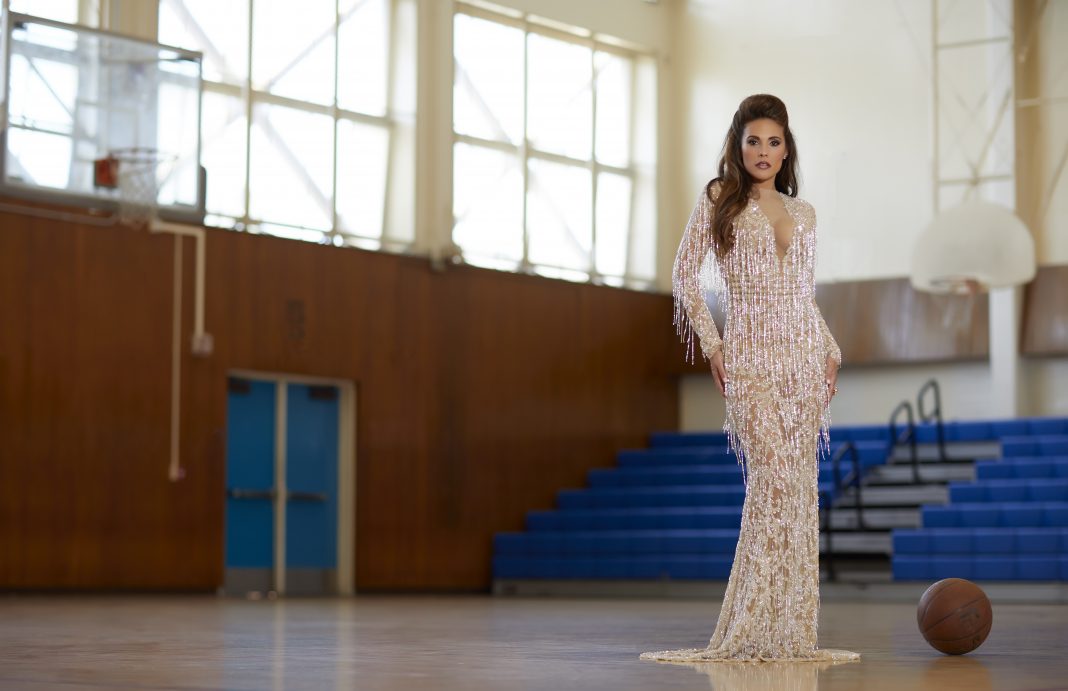 So, what are you up to these days?

I’m working as a reporter for FOX Sports in the US, working for BBC Sports in the UK and internationally, and I am a cast member on the current season of VH1’s Basketball Wives. My passion is my charity work, focusing on the welfare of animals and our military’s veterans. As well as visiting Capitol Hill often to get bills passed for animals and our wounded warriors. Every day is a crazy busy day for me!

Which was your favorite gown from the RUNWAY photo shoot?

I’ve always been a big fan of Rita Hayworth, and the red dress made it feel as if I was her.  I love the glamour of old Hollywood.

Who is your favorite designer?

Stella McCartney.  As an animal activist, I like that her line is cruelty-free and she has a vegan line of boots and purses that I’m a big fan of.  I have many of them!

Tell us about your charity Hounds and Heroes.

Tell us about your multiple USO trips.

I’ve traveled nineteen times on USO or Goodwill tours to entertain and support our troops deployed all over the world, including eight trips to Iraq and Afghanistan. The experiences I’ve had on these tours are absolutely life changing. To be with our heroes in a combat zone is unlike anything you will experience. Coming from a military family these tours have been the best times of my life.

Tell us about your first acting experience.

I had many guest starring roles but my first recurring role was on Baywatch where I had a 4 episode arc. We were filming an episode and a riptide grabbed me causing me to get pulled out into the ocean. The real Los Angeles lifeguards had to come save me..something I won’t forget! Looking back it was an honor to be a part of such an iconic show…I still have my red one piece swimsuit and lifeguard can.

This was my first foray into reality television and it has been quite the experience to say the least…lol! I’ve made a couple great friends on the show which has been nice.

Did you love your NBA/NFL cheerleading days?

Being a professional dancer and sports fan this seemed like the best fit. I started off dancing for the Golden State Warriors, San Francisco 49ers then to the Dallas Cowboys…and received a Super Bowl ring. I traveled all over the world and was cheering for the best teams..at that time. These days really molded me and gave me a great stepping stone for my career. These were some wonderful times in my life!

Tell our readers about the rings you are wearing in our RUNWAY photo shoot.

I was fortunate during my time working for the Los Angeles Lakers as the first (and only!) female NBA scout that the team won five championships.  As part of front office of the organization, I received a ring each year the Lakers won.

What is your next venture/project?

I have my own digital sports show that will be debuting next month, my children’s book will be out in the Fall as well as re-launching my clothing line…Doubleplay Sportswear. Also I am working with a great team to produce a show that combines food, travel, and sports, I am also the host and producer. Look for it on the airwaves early next year!