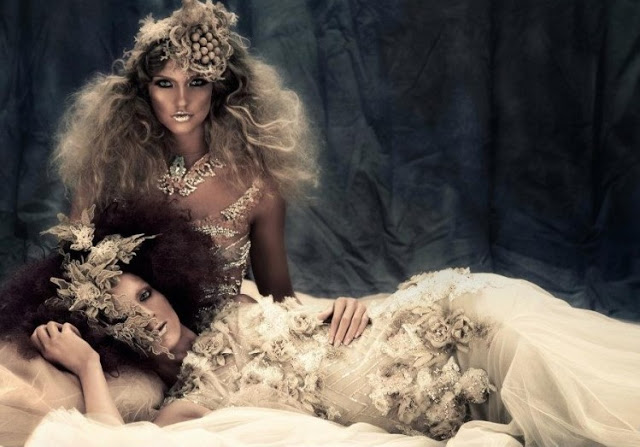 Originally from the Philippines, Furne first entered the fashion world by winning MEGA Magazine’s Young Designer Award in 1994, which was judged by Josie Natori. Josie snatched up Furne with an apprenticeship at his New York design house. In that same year, Furne nabbed first prize at Japan’s Women’s Wear Awards and went on to become a finalist at Manila’s Fashion Designer Awards just three years later.“When it comes to fashion, of course, I don’t like to be just like everybody else,” says Furne. “Having my own identity is very important to me. I design for my own pleasure and it is important for me to get the whole look right. So more than just the dress, I also like to play with the styling. Trying stuff and changing them around, until I achieve just the right and complete look.”To help achieve this right look Furne speaks of for Amato, which means “beloved” in Italian, he partnered with textile expert Rashid Ali to build the Avant Garde label. The Amato Couture boutique opened its doors in 2002 in Dubai, to provide an elite clientele with a bevy of hand-stitched designs and elaborately detailed creations. The Amato label prides itself on creative culture, eco-friendly ethics and fair policies. “Meshing cultures, using the region’s rare arts, layering it with eastern and western elements, I create unique pieces for my urbane and globalized clients, reflecting their personal and cultural identities,” Furne says. With his extra care and attention to his clientele, along with his undeniable respect for women, it wasn’t long before Furne was flooded with work. Every Amato collection is a representation of the silent strength of women. “My creativity is inspired by my mother and grandmother’s quintessential style that colored my vision,” explained Furne. “I have always tried to create exquisite and ethereal design tempered with a silent touch of strength. My collections aren’t for the faint hearted woman, but one who is comfortable in her skin; her ensembles are but a foil to reflect her inner persona.” Swarovski took notice of Furne’s fabulous Amato line, and commissioned him to design a glittering bridal dress, which was featured in their limited edition book, Unbridaled. Since then, Furne has continued to collaborate with Swarovski with outstanding collections for its Crystalized Swarovski Elements events.Furne’s brand has made many TV Appearances, including Germany’s Next Top Model, which had him working with Heidi Klum on several seasons, Americas Next Top Model Cycle 19’s finale episode, working with Tamar Braxton on tour with a one-on-one consultation with Tamar herself on The Braxton’s , and has launched Amato Couture into the forefront of the fashion world. His fresh, artistic and beautiful creations are sought out by celebrities like Beyonce, Jennifer Lopez, Katy Perry, Shakira, Nicole Scherzinger, Lady Gaga, Jessie J, and Nicki Minaj just to name a few.In 2012, Furne brought Amato Couture to the United States, with his first major relationship and collaboration in Los Angeles with fashion stylist and branding rep Alexandra Lerma. Together they started conquering the Hollywood industry one stitch and fabulous project at a time. He has consistently pushed boundaries and evolved from a local Dubai label to a global explosion. Amato has been receiving praise and awards at every fashion week showing and now has an international cult following from royalty to celebritiesFurne’s next goal is to cement Amato as a global brand; one that can be more ready-to-wear than couture. With his Spring/Summer 2015 collection showing at Mercedes Benz New York Fashion Week, Furne takes this as a good sign for the future. This was his second showing in New York, and to him, it is one of the biggest fashion industry honors. “This was my dream, I am living my childhood dream. I worked hard to achieve this dream and I think my determination brought me here,” he shared. To keep up-to-date with Amato by Furne One, check out: www.amatohautecouture.com. You can see a current list of projects the brand is working on, as well as beautiful fashion art.

What made you want to add more ready-to-wear fashions in the Amato line?We wanted to be able to cater to all of our followers, not just the socialites and royalty, but also to the everyday woman. The goal is to create something that is plain and simple like a blouse and a pair of shorts into something equally intricate and opulent as an Amato haute couture gown – but for a lower cost.Where does this leave Amato as far as couture goes?Amato is and always will be an haute couture brand. Our ready-to-wear line is more of an extension rather than a transition. What inspires you most when you design?I get inspired by so many things! From movies to TV shows and music to my travels and the different cultures I encounter.Growing up, who were your favorite designers?Designers like Christian Lacroix, Donna Karan, Coco Chanel and Armani were my favorites.What was the best piece of advice you have received in the fashion industry?The advice that really stuck to me was from my apprentice days in New York with designer, Josie Natori – ‘Always be responsible’. What was it like working with Heidi Klum?Heidi Klum has always been one of my favorite Victoria’s Secret Angels. Getting to work with such an amazing model such as Heidi was a completely unforgettable experience.

How much fun do you have getting to collaborate frequently with Swarovski?It is every designer’s dream and honor to collaborate with such a huge name such as Swarovski. Being able to work alongside people that shared the same aesthetic and vision allowed me to have complete creative freedom that meant limitless possibilities. Where do you see Amato going within the next five years?Amato intends to grow and expand from a singular brand into a global fashion empire. It sounds ambitious, I know, but then again, anything is possible. What is your favorite fashion trend for 2015?I love how many of the collections are influenced by what the people on the street are actually wearing. Basic articles of clothing such as t-shirts and shorts that used to be, well, ‘basic’, are given a minimalistic make-over coming out over-sized and boxy with exaggerated silhouettes that exude an air of nonchalance.What advice would you offer to inspiring designers?A lot of young designers think that the fashion industry is just about pretty dresses, fabulous parties and being famous. They often forget about the responsibilities that go along with it. The truth is, it’s all about having a clear vision of your aesthetic, good business acumen, hard work and perseverance.