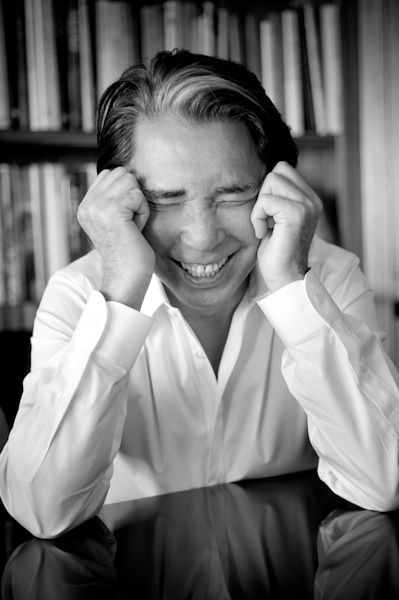 The years of work where stress courted with passion, and drunken nights, did not change this lover of freedom. Quite the opposite. “The world is beautiful”, he tells us, when receiving us, with an amused air.

Our meeting took place in the uncluttered living room of an amazing Haussmann apartment. I tend towards a more Babylonian style personally, however here everything is strictly under control in a clean Japanese style. There are two letters on the doorbell: K.T. From here on, Kenzo is Mr. Takada.

Having tea at the home of Kenzo T. is a singular event. More so is the fact that as soon I sat down, he tells me that he put a lot of cream on last night so that his features wouldn’t be too drawn this morning. “Are they alright?” he asks me, touching his skin. Kenzo needs to be reassured. He can be. He doesn’t look all of twenty.

Kenzo grew up in Himeji in the heart of post-war Japan. The fifth of seven children, this man, who has an astonishing memory, like his preferred animal, the elephant, has practically no memory of his father. “He wasn’t around.” He won’t say anymore on this subject. Paradoxically, the maternal figure captivates him: “I was fascinated by my mother. She was omnipresent, and incredibly elegant in the kimonos she wore so well.” When I ask him what the word “childhood” evokes for him, his answer is laconic: “I don’t like school.” This has a good reason, moreover. His school years were complicated due to dyslexia. Oral expression remains a complex for this man who, paradoxically, multiplies the ways of expressing yourself. “I feel as if I don’t know how to speak.” says this false-shy figure who says that he feels uncomfortable at dinner parties.

At the age of 10, the West calls out, via the movies: “My first American films made me open up to Western culture. What impressed me most were the beds. I didn’t know that they existed. I asked my mother if she would make me one in the cupboard used for storing cushions.” A few years later, the Bunka College, a prestigious fashion school in Tokyo, opened its doors to boys. Kenzo Takada would be the first to rush over without worrying about what would be said about it or his father’s view on the matter, who was violently opposed to this choice. “University, at any rate, was not my thing.”

When I ask him how he financed his studies, and his life, he exclaims laughing, “I sold Tofu!” I am speechless, thrown by his response. He goes on to explain that he was also a painter. “Yes, I was also a construction painter at my joint tenants. For a period of six months, this allowed me to pay the rent.” I don’t dare tell him that I need work done at home–that would be indecent. Kenzo goes back to the years he spent at Bunka College. “When I entered the school of design in Tokyo, I felt I was beneath everything! I wasn’t at that level. Kenzo admits that he hated his first year. “I couldn’t understand anything.”

An encounter was the thing that gave him an unbelievable impetus. “In the second year, a woman who was a lecturer in fashion changed my life. She just came back from France and I joined her class.” Mrs. Koike. Kenzo owes her his career and we owe her Kenzo.

This lecturer gave Kenzo the courage to leave the “Land of the Rising Sun” for Paris. “I was able to leave for Paris because I won a competition in Japan for a fashion magazine. That allowed me to be published and earn a little bit of money.” On the advice of Mrs. Koike, Kenzo sets out on a voyage of initiation. “As I had never been away from Japan, Mrs. Koike advised me to go to Paris by ship to discover the world.”

On November 20th, 1964, he embarked on a trek, which looking back, proves to be the symbiosis of everything that makes up his style. Singapore, Hong Kong, Bombay, Colombo, Djibouti, Alexandria – all of these ports of call would be revisited in his creations.

Fifty years later, he is still capable of bringing to mind every minute, color, and feeling originating from this trip which took him to Marseille. “Those stopovers were an enormous visual shock for me. That trip transformed me by making me open to the idea of the melting pot, the unknown, and to the cuisines of the world…”

Kenzo disembarked on December 31st. On January 1st, after a festive all-nighter, he arrived in Paris at the Gare de Lyon railway station. The first months of Parisian life were not a waking dream. “First of all, I didn’t know French and I found Paris very sad. I had expected to discover “The City of Light”, but it was grey with dark buildings, and it was cold. I told myself that I would try and stick it out for at least six months.” Today, retrospectively, he admits that he would not recommend a young fashion designer to set themselves up in Paris, but rather to have ties there. “Here, there are the greatest embroiders, the best feather workers, a compendium of journalists and buyers, and a savoir-faire unique in the world.”

Kenzo Takada recalls the luck he had: “Just imagine, I arrive in Paris in 1965 and in April 1970, I open my first boutique! I moved on by doing two covers for Elle magazine. In the beginning, I was really scared and then later I was baptized as “the most Parisian of Japanese fashion designers.”

At the age of 30, on April 14th, 1970, he opened his first “miniscule” boutique called “Jungle Jap” in the Galerie Vivienne. A “rustic” beginning for an adventure conducted with friends who would keep staying one step ahead of the times. Kenzo showed audacity, decreed courageous associations, exuberant prints and a timeless poetic style. “Those were crazy years for me.

We worked non-stop and went out in the evenings. I remember Loulou La Falaise: funny, eccentric and so elegant! I adored her. I think that for a period of two years, we went out together every night.”

Then Kenzo looks down and adds, in a tone marked by tender irony, “Afterwards, she got married and then things changed a bit.” He is untiring on the subject of the parties and Parisian nights and cannot stop talking. “We used to go to the Palace, to Sept and to Chez Regine. Wherever we went, we danced till dawn!” Kenzo loves to dance and admits that he even took flamenco lessons. “You know, I just love to dance and to laugh!” Because he likes to laugh, I ask him to give me a demonstration of Flamenco. He laughs. With a great sense of fun, he explains that he disguised himself as Minnie Mouse and also wore fishnet stockings at those big Parisian parties. “You know, that life was stressful and, after 30 years of stress, my dream was to take a long vacation. I remember my last fashion show on October 7th, 1999, at Le Zénith in Paris. On December 9th, everything was folded up and the adventure came to an end. I had wanted to go to Japan to lead a new life. My days had been planned to the second and then, from one day to the next, there was nothing anymore. There was a big empty space. In reality, I had not been aware of the strength of my passions and so I found other means of expression. I went back to France and launched into several projects which are dear to me such as “l’art de vivre” and painting.”

At the dawn of reaching sixty, Kenzo Takada decided to take a new direction to his life and embarked on painting and playing the piano “but only to relax my fingers.” Art reverberates in him as the “communication of emotions.” I suggest to him that we talk about his painting work. He interrupts, “I still cannot say that I am a painter. I have too many doubts. I took a course with a lecturer in fine art to reassure myself. I need to get back to it.” In terms of painting, Kenzo gets his inspiration from the Noh theatre. In this Japanese theatre, men interpret the women’s roles. “First of all, I adored the costumes that reminded me of my childhood, and then there’s the question of the splitting of personality, which is fascinating, even if this world remains very masculine. Did you know that the Samurais adored the Noh theatre?” Matisse is Kenzo’s preferred painter. He appreciates his simplicity and the emotions that his painting brings out. “You know, my lecturer often shakes me up by saying, ‘Kenzo, your paintings don’t contain any emotion’!”

However, through his paintings, Kenzo Takada dramatizes himself with a staggering realism. I then ask him to tell us more about the Noh theatre. “In this theatre, when the Noh actor puts on his mask, he symbolically leaves his own personality behind in order to take on that of the character which he will personify.” Can I just affirm that it’s really him behind all those masks?

“Yes, it’s me, but I’ve taken the wrinkles away!” Replying to the question of his choice of self-portraits, he replies that it’s obvious. “These self-portraits are my roots and the idea of hiding, of masking my fears, is very present in this work.” We come close to psychoanalysis when I venture a question about his feelings.

“There is only one step between love and art and today, still, I would like to find a person with whom to share my world and my life with. Sharing is essential in love.”

What has to happen to seduce you? “You need to be generous and have a lot of love.” Good taste reasons with itself like a pleonasm, but is Kenzo a man who is easy to live with? “I used to think that I was a man who was easy to live with but actually, I always feel the cold.”

Do all these traits of humor perhaps hide a fragile personality? Kenzo seems to make do with this. “If you ask if I am fragile, say that I often have a sore throat.” I’ve had my reply. I know the name Kenzo – I will remember Takada.

Behind the masks of Kenzo Takada (10 questions)

If you were a work of art, what would it be? A statue of Buddha.

How does your first name inspire you? It sounds serious – a little bit too much like “business man”.

Your favorite swear word: Merde! I swear in French.

Would you like to be your own friend? Yes, but it’s difficult.

Which one do you prefer: green tea or vodka? Both of them!

What cologne do you use? Since 1989, I have been wearing Kenzo pour Homme.

Which of the senses would you be prepared to give up? The sense of touch.

What criticism hurt you? In 1971 in Tokyo, during a fashion show, a journalist said, “That’s a peasant who succeeded in Paris by using Geishas and Fuji-Yama. I came home and cried.”

What makes you laugh? Very silly things and I do a lot of these!

What can get on your nerves in less than 10 seconds? A lack of punctuality.

Have you lied during this interview? No… well at least I don’t think I have!