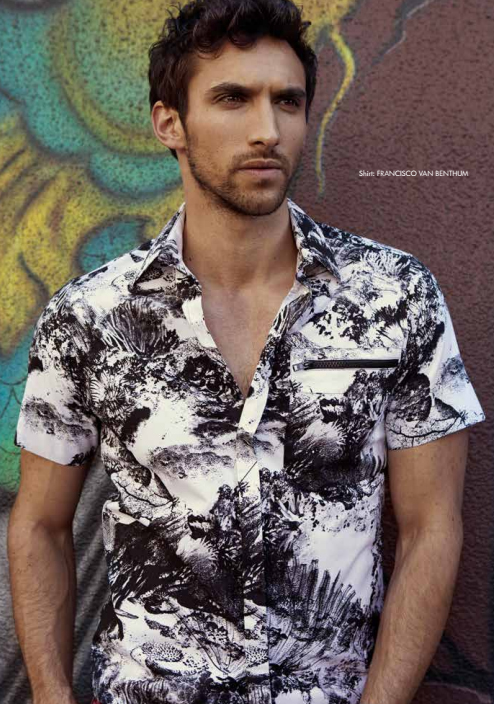 What was it like to join the cast of Devious Maids right as it transitioned into a popular and widely known show?

Very exciting. When joining a pre-existing show that has proved to be very successful, it’s a gift. You aren’t living with that metaphorical dagger dangling over your head about whether the show will go past pilot or not. I could just focus on whether viewers would take to, and enjoy, my character and work instead. Actors are always finding something to worry about! You then hope to be able to be part of the reason the show goes on to be a bigger success.

What is it like to work on a series, as opposed to a film, where you are given a character, but have no idea how they will develop until you start each season?

If I’m honest, it’s a challenge. I personally thrive on challenges, so it works. It is a huge difference [compared] to film and especially theatre, where you get to rehearse and explore and really understand the track and arc of your character back to front. You can sometimes be shooting something not knowing the definite reason for why you are doing what you’re doing, but hey, doesn’t that kind of sound like real life sometimes?

Do you prefer to play roles where you can personally identify with the qualities of the character? Or do you prefer roles completely opposite to your personal nature?

I think it’s imperative that you identify elements of yourself in whatever character you play. That, to me, is the truest form of acting—showing yourself whilst playing someone who obviously isn’t you. So while you are different from your roles, you need to understand psychologically where their motivations and intentions come from, and to do so, you need to invest yourself to see where those similarities lie.

With a background in martial arts, do you think you would ever start doing your own stunts?

I just was doing a big fight scene last week and I always enjoy it, even if I lose, haha. I have a pretty gung-ho attitude, so I do enjoy the physical stuff. I would love to do an action-heavy psychological piece à la the Bourne movies.

As an actor that is quickly climbing to the top in such a short time, what has been your biggest struggle?

Well I have a hell of a long way to go and I don’t think there is ever a top, per se. I think there’s work that I aspire to do and ways in which I look forward to growing as an artist. It seems to me that struggle, more often than not, is a constant in an actor’s life and it’s almost necessary as it can be a fantastic form of creativity. I struggle often in many ways, sometimes just to get out of bed.

What was it like the first time you met, and read with, the cast of Devious Maids?

There’s always a little bit of trepidation involved when meeting a cast that’s been together for a while and reading. It’s almost like your first day at school. Everyone was lovely, welcoming and pretty darn funny, so that really made it easy for me.

What have you enjoyed most about working on Season 2 of Devious Maids?

The people. We are fortunate to have a fantastic and lovely crew and they really are the heartbeat of the production. Getting to know and observe them has been great. Then there is the motley crew of actors who are all unique and brilliant in their own individual ways and I have cherished my time with them. Finally, the people of Atlanta. They’re warm, friendly and diverse.

Is there anything that you are allowed to tell us about what is in store next for your character?

Well we are nearly halfway through the season as we speak, so at this point, viewers have already gotten to see the crazy, tumultuous dynamic between Tony and Evelyn. People can expect that to continue, get even crazier and eventually rise to a deafening crescendo!

Are there any funny or embarrassing moments, on or off camera, you are able to tell us about?

It was a little embarrassing and not very funny when I was late to a very early call time as my alarm malfunctioned. Well, that’s the official excuse anyhow, haha. No, it was very early in shooting season two and I hadn’t been around long. I was still adjusting to the East Coast time difference. Being awoken from my oversleeping by production knocking on my front door isn’t that enjoyable. I was having a great dream too.

What can we look forward to, in regards to upcoming projects?

I have a few irons in the fire, so we shall see what comes to fruition first. I just hope to be able to continue working with interesting and brilliant people and constantly evolve as a result.

Is there anything you would like to tell the die-hard fans who religiously watch your show?

I would like to give them a huge thank you. They’ve been so incredibly supportive of the show and of me personally. I have a great rapport with them on my Twitter (@iamdominicadams) and look forward to continue providing them with work that they respond to.