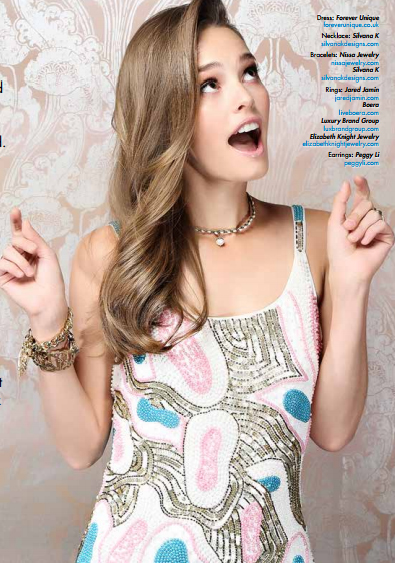 You play Adilyn on True Blood. Are you similar to your character at all?

Yes! Adilyn reminds me of my younger self. There is an innocence about her but also a hunger to experience life. She loves to rebel and there is definitely a part of me like that.

This is the last season. How do you think you’ll feel when it’s over?

I think I will feel very accomplished! Being on a series has been a big dream of mine. I feel so lucky to have shared this experience with such amazing people! This experience has taught me so much about the industry and about myself and even though I’ll be sad when it’s over, I’m so excited to see what’s next for my career.

Do you remember when you received the call that you got the role? How did you react?

I was actually on my way to the first table read when they told me for sure I would be recurring! I couldn’t stop smiling and giggling! It was so awesome to get the news and then immediately get to meet everyone I would be working with. They probably thought I was a little crazy because I was SO happy to be there!

What has been the most exciting scene to film?

I shot this big stunt scene where my light powers blast someone across the room! It was so cool because when it all came together it felt like I really had the power to do something like that! That’s what makes working in a magical world so fun!

If you could bring one True Blood character back from the dead, who would it be?

I would probably bring back Denis O’Hare who played Russell Edgington. He was so badass in an evil way! I’d like to see Adilyn take him down with her faerie powers!

Staying warm during night shoots! Haha! It gets really cold at night!

If you could star in a new television series and could bring one actor from True Blood with you, who would it be? What roles would you play?

Can I bring them all with me? I would seriously love to work with any one of the actors on the show again in a new project! But I think it would be fun to work with Amelia Rose Blaire because she and I were friends before getting cast in the show together. We could do a spinoff of True Blood with the young Vamprie and Faebie. We’d be best friends! Haha.

You have a film coming out later this year called Hard Sell. Tell us a little about the film.

I’m so excited about this film! I fell in love with the script after reading it. Sean Nalabof, the writer and director, created this very real, coming of age story. I play Katy, a very neurotic, over tanned preppy prep school student. She and her boyfriend Smith are always either making out or fighting!

Do you have a preference between film and television?

I would love to do both! I’ve really enjoyed working in television and feel so grateful to have had a somewhat steady job for the past year and would love to do more television! There is also something so special about making a film. You dive into a new world with people who become family for the duration of the shoot. I love that!

How do you spend your days off?

I spend a lot of time with my friends. And I love to do yoga and go hiking. Being outside is very important to me.

I’ve had a love affair with chocolate and shoes my entire life. There is no way I’d be able to choose!

Any other fun facts fans should know?

I really love photography! It’s another creative outlet for me. I love taking photos of my friends. I’m learning as I go.