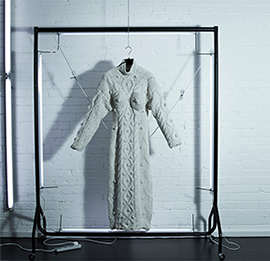 Bursting onto the French fashion scene in the mid 1970’s, Jean Paul Gaultier soon established himself as the most provocative designer of his generation. Inspired by a combination of historical references, eclecticism and transgressive behaviours, Gaultier stood out with his androgynous, unflinching style which questioned gender and transgender issues. Multiculturalism and ethnic diversity were also at the forefront of his consistently challenging collections.

Mixing high fashion and street culture, Gaultier raids; then dismantles post-modern sensibilities, reinterpreting and upgrading the clothing of the alienated and ethnically diverse. He appropriates, transforms and reinvents, creating a new kind of fashion which is distinctly his own. However, despite the often controversial themes of his collections, his clothes reflect his obsession with craftsmanship and attention to detail.

The JEAN PAUL GAULTIER VAULT sale consists of 50 never-worn-before, mostly runway and editorial pieces, including the infamous cone bra knit dress from the “Le Charme coincé de la Bourgeoisie” AW85 collection – undeniably, a pioneering example of Gaultier’s earlier work. Other notable pieces are a selection of sequinned knits from the tribute to the Russian Constructivist art movement from the AW86 collection.