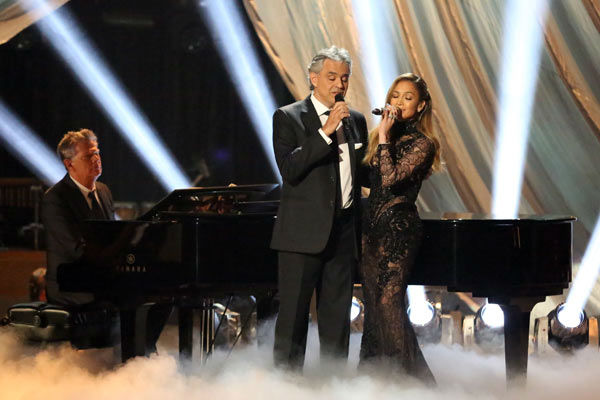 Last week on ABC’s Dancing with the Stars, Jennifer Lopez debuted her duet with Andrea Bocelli, the Cuban classic “Quizás, Quizás, Quizás” by Osvaldo Farrés, from Bocelli’s fourteenth studio album titled “Passione.” It was a glowing performance with lots of charm, and Ms Lopez was an absolute stunner (as always!) in her shimmering ensemble.

The iconic star wore a gorgeous, floor-length, embellished black gown that we had the priviledge of seeing in-person on the catwalk, at the Michael Cinco A/W 2013 show in March at Style Fashion Week LA. Lights were down at the Vibiana as onlookers ancipated the closing show of the week. To operatic tunes, models began to line the runway, in mostly black with an air of exhaggerated, enchanting dark glamour. They walked with a slower gait so that every feature of the incredibly detailed pieces could be taken in. Male and female models had their outfits accented by body paint and body jewels, in intricate and symbolic designs.

There were not one, not two, but THREE notable show-stopping pieces; a torso-hugging red dress with a feathery train worn by Raina Hein (ANTM Cycle 14); a dazzling jeweled red-and-black gown with a ballroom skirt and beautiful ruffled back; and a black gown with a skirt nearly as wide as the runway, the model adorned by a queenly black crown. The jaw-dropping collection featured a number of sparkling dresses and accessories that had audience members swooning, drawing more applause and “ah’s!,” than any other show of the week. The central focus was definitely on the assortment of glittering haute couture gowns the rest of the looks seemed to blossom from. Elegance, poise, and the high standard of craftsmanship Michael Cinco is known for were highlights we took from the spectacular. It seems LA’s greatest have taken notice, too!