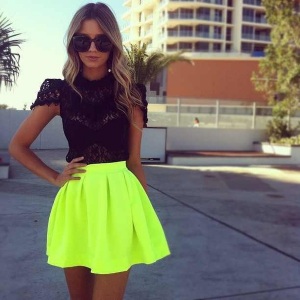 Our closets are only so big and with 2013’s new styles bigger and bolder than ever (rumor has it the freshly wet mermaid hair is making a big comeback) and New York Fashion week just next month, it’s time to mentally prepare for the departure of some of our favorite 2012 fashion trends that just aren’t making the cut in 2013.

Makeup and shoes included. Remember when Neon was the must have clothing item? Yeah, we don’t either. A huge hit in September of 2011, this trend held on throughout 2012, making a brief comeback in November, but ultimately fading out with the beginning of the New Year. It’s been great, but we can only be blinded by outfits for so long.

While this color made its grand debut in June of last summer, it looks like fashion is going greener this year, with Emerald the latest up and coming color.

Yes. We know, it broke our hearts too. While layering bracelets was made popular by blogger Leandra Medine, trend charts have shown these arm party trends started declining in August. While they appeared again in December, their popularity started dropping almost immediately again at the end of the month. The good news? The trend has fluctuated since it first debuted last May so don’t toss your heavy metal inspired studs just yet. Instead, opt for wearing just one or two.

While 2013 marks the departure for some of our most memory-filled outfits (I mean how could a neon mini skirt not!) sophistication and glamour will take their place with trends like slash neck tees and collarless blouses leading the way.