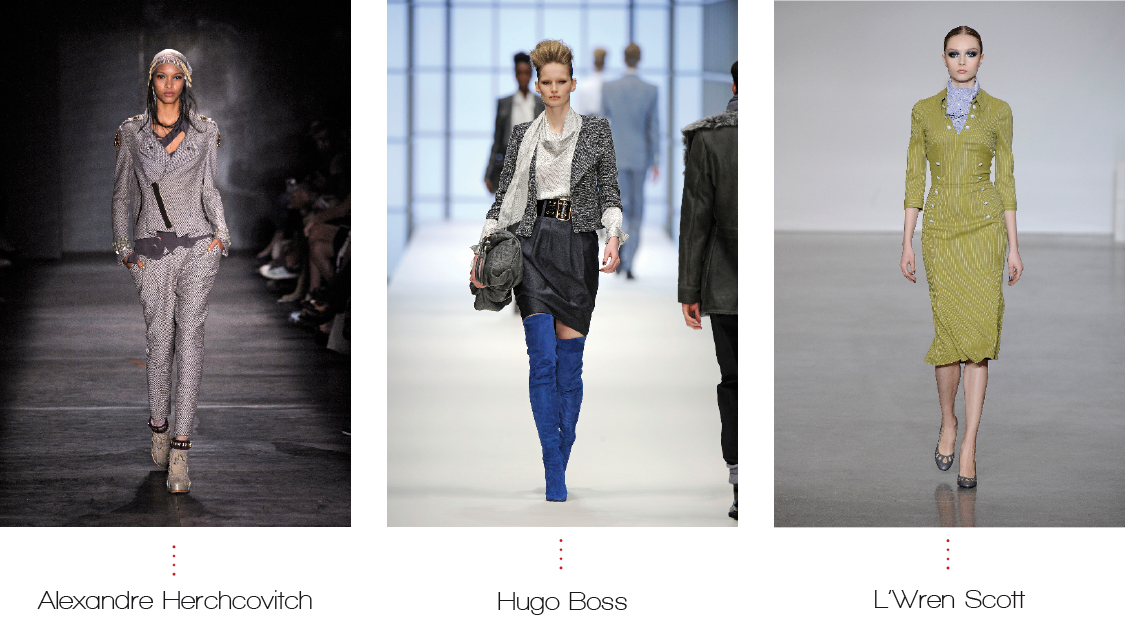 But we love today’s new business-wear, too. Polished, structured suits matched with a soft, draped blouse in a great color like Hugo Boss showed on the runway. And check out Gucci’s natural-toned, sophisticated and sleek suit with that metallic silver blouse – irresistible. We think women in the office have never looked better.

Women’s business wear has dramatically evolved over a relatively short period of time. Influenced by Victorian etiquette early on, where ladies generally didn’t need to have very functional clothing and were in some places even legally barred from wearing pants, the 20th century brought with it unavoidable changes that radically altered people’s perception of what was important to their lives. With social changes came changes in attitudes about what constituted “acceptable” clothing.

The latter half of the 1800s saw a revival in Far-Eastern influence in all of the arts – the spread of the Japanese, and later, Chinese, aesthetic is attributed to world exhibitions, fashion designers and a couple of wars on the continent in the early 1900s. We have this influence to thank for such now-common clothing features as V-necks and rounded necklines, tunics, and tube-shaped sleeves, as well as the rise in popularity in Western culture of traditional Far-Eastern pieces like the kimono robe. These Eastern design styles helped to change the silhouette of Western dress and started us down our evolving path.

After World War I, women started feeling a bit more free. People were celebrating the end of war in their choice of wardrobe. The Roaring ‘20s saw a focus on youth culture and fun; hemlines started creeping up, cuts were straighter, waistlines dropped or disappeared altogether. And when the tough times settled in after the stock market crash of 1929, clothing choices reflected that too, with a return to more conservative, natural-waistline dresses.

The 1940s brought a second war and a different wardrobe sensibility. Materials and supplies were mostly rationed and the social push in the Western world was to reuse and recycle to help the wartime effort. Women, now more at work outside the home than ever before, needed practical clothing at their commercial or military positions. Women who worked in offices began to re-cut men’s suits to fit themselves. There were even patterns to help. (Could this be where that awful tradition of women feeling like they needed to look like men in order to compete in business started?)

But the post-war era also brought back Chanel. After a hiatus during the war, closing her shop out of a sense that it was an inappropriate time for such frivolity as fashion, Chanel reemerged as a leader in the industry. She is credited with popularizing the little black dress and of course, she gave us the still-popular Chanel Suit with its collarless, tweed jacket and matching slim skirt.

From there, each generation has felt free to bring its own social attitudes into the design table. The freedom, especially political and sexual freedom for women, of the 1960s and ‘70s was translated into acceptance of choice in wardrobe styles. The financial boom of the 1980s drew more people to designer fashion than ever before, and in return, saw some of the designers start to offer ready-to-wear collections that were more affordable for those not as affluent.

Today, beautiful, feminine clothes that lose none of their sophistication or board-room-power are on the runways. Tailored, polished, with bursts of color and softly draped fabrics – these are really a reflection of the ways in which women see themselves in the workplace; women these days are unafraid of competing in the business world as stylish, beautiful and skilled women.