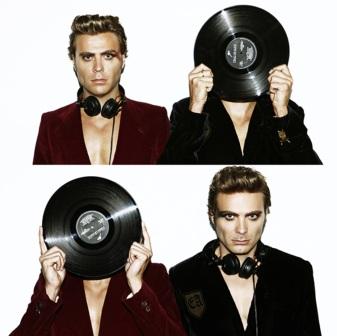 From the U.K. to Los Angeles, international house music deejays The EC TWINS, otherwise known as Marc and Allister Blackham were born to spin and mix records. With house music running through their veins, these twins are shaking up the club scene all over the world.

The EC Twins started their careers as entrepreneurs constantly challenging themselves and keeping busy working their way up the music industry ladder in Edinburgh, Scotland. Within the past five years they relocated to Los Angeles, initiated a buzz in the local music scene with their high energy, unique style, and fresh beats as house deejays, and recently started producing their own tracks.

The EC Twins are not your average house music bumpin’ deejays, their U.K. flare is revolutionizing the club scene in the U.S. We recently sat down with the twins to talk music and style.

Tell us about your latest project, we understand you are not only DJing but you are currently producing too?
Yes, we have been locked away in the studio working hard for the past 12 months. It seems like we haven’t seen any sun whatsoever all summer. We produced for many years back in Europe but never under our EC Twins moniker. We decided to release our new productions under the name of “The E.C Twins” so that people become aware that we produce as well. Our first release, which is a remix of Paul Harris and Second Suns track “Doing It Well” has been a huge success and looks set to become even bigger. We plan on releasing a new track every month over the next 12 months, including remixes of other artists work alongside our original tracks. We are about to release our latest track “I Wanted” that will be followed up with an EC Twins remix of Paul Oakenfold’s latest single. We love to collaborate.

There are so many sub-genres of house music, which is your favorite and why?
Sub-genres in house music can cause controversy and can be difficult for some artists and DJ’s to embrace. However, we love everything house and play every single sub-genre whenever we can. It’s much more exciting that way. Disco, Tech, Funky, Deep, Soulful, Electro, Dub step, bring them on we love them all! Versatility is something we pride ourselves on.

What was it like playing at the Electric Daisy Carnival?
We have only been to EDC to represent one of our residencies MELODIC. We had a stage at EDC in 2009, but concentrated more on the production so we did not perform. In 2010 we went to EDC to support Second Sun with their performance of “Doing It Well”, but we have never actually played an entire set there. Obviously for us as artists, playing festivals like EDC and COACHELLA are the pinnacle of our live-performance dreams come true.

Tell us about each of your fashion style, as twins do you have different styles?
For many many years we were known for wearing tailored suits when we performed. In many ways it was costume to disguise our poor upbringing. When we began touring in places such as Singapore where the humidity is insane we had to re- evaluate our wardrobe choices. We wear anything from dressy costume level clothing, to t-shirts and casual clothing depending on the type of performance. Fashion has always been a very important factor to us and our crowd. Dressing up is fun, and at the end of the day that’s what we are best at (having fun).

Who is each your favorite designers and why?
British designer Vivienne Westwood holds a very important place in our hearts. Her history and unique attitude is something we always felt drawn towards. We met her many years ago while on tour in Milan, and since she liked our image she actually used us as models in some of her first men’s shows. Wearing her suits was a pleasure, and having them personally tailored by Vivienne and her team made us understand even further how talented she is. She doesn’t take things too seriously and adds a touch of theatre to her clothes, which we love.