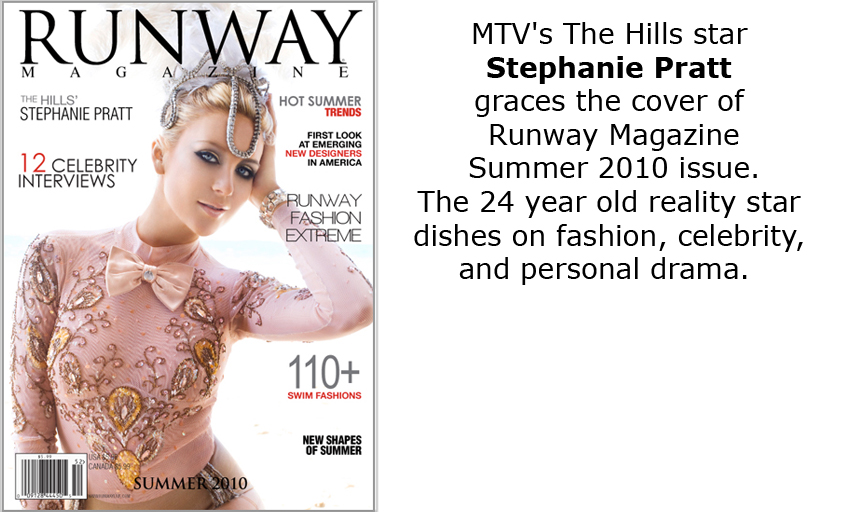 From The Palisades to The Hills, Stephanie Pratt has grown up a California girl. No longer recognized solely as the little sister of an antagonistic brother, she has admittedly come into her own over the past nine months. Now at 24-years-old, she finds comfort in optimism and believing her life isn’t defined by situations, but rather by how she handles them.

Runway met Pratt on a Saturday morning at her photo shoot, around the corner from her FIDM stomping grounds. A friendly easy-going girl successfully finding her way through the Hollywood maze, she remarkably still seems a little uneasy with all the attention.

Chatting about the comfort of Steve Madden heels, Pratt slips on some breathtaking YSL platforms and is off to shoot her first look. On her way, she lists some go-to fashion favorites: “Silk tops from Yana K, Myne and Rory Beca, Chloé lace-up wedges, Tsubi jeans and anything Marchesa for evening.”

When fashion director Nolé Marin calls out for ‘a sexy look,’ Pratt laughs, adjusts her stance, shrugs her shoulders and says, “I only know how to smile.”

She is attracted to bright colors that reflect her mood. “I can’t help it, I’m so L.A. – I love shorts, dresses and ripped jeans.” When it comes to summer fashion Pratt plans “to hit up the Splendid store on Robertson – It’s all about nautical stripes … super-thin cardigans and military pieces that’ll carry over through fall.”

Recalling October as a turning point, Pratt’s done playing into the judgment that being on a reality show can elicit. “I think about what the next page will be – you can either spiral down or grow up,” she says. Referencing some recent media negativity, she’s confident she can get through anything by believing in herself. “Then I’m like, ‘Hey, it’s over and I’m OK,’” she explains.

After finishing school at the American Academy in Paris, working as a P.A. on ABC’s Lost set in Hawaii, attending the Fashion Institute of Design & Merchandising (FIDM), then being plucked from class when cameras followed Lauren Conrad in one day (“It was so not staged, seriously the most gigantic coincidence ever!”), Pratt fell into The Hills without planning to do so.

And she’s grateful she did. Airing its final episode this month, Pratt is ready to move on and immerse herself in new projects.

Always an avid collector of handbags, she reminisces back to when she was a 7th grader who hung handbags instead of N*SYNC posters in her bedroom, spent all her allowance from chores on Kate Spade purses, and kept her own sketch book of designs for “when the day would come.”

The, the day finally came. For years, Pratt was looking without luck for a local leather manufacturer to realize her designs. Finally, help arrived and she was handed the scribbled phone number of a manufacturer just outside Los Angeles – the happiest day of her life.

Fast-forward to spending all her savings on product samples, where Pratt reveals these designer dreams to her new publicist. And like any great publicist, an immediate introduction was produced. Enter Simone: Pratt’s eventual collaborator and “greatest blessing.” Now, having just seen the first samples, Pratt beams as she envisions their launch this fall. Want a sneak peak? Expect multiple colors, non-exotic leather, studs, optional long straps and functional pockets.

When it comes to beauty, especially on the go, Pratt has some staples of her own that include Bare Escentuals bronzer, multiple mascaras, and turquoise Kitty eyeliner from NARS (that she asserts no makeup artist has ever condoned).

Another project recently spawned when she was approached by one of her favorite designers, Yana Khromova, to appear in the Yana K holiday look book. Already elated, Pratt was floored when Khromova invited her to design pieces for the Spring 2011 collection.

On style icons, Pratt is quick to say, “Jennifer Lopez always kills it” on the red carpet – then laments a bit about her struggles growing up idolizing supermodels. A fan of the indissoluble Kate Moss, she fell in love with the self-assured model and her relaxed mix-and-match style off-camera. Yeah, we get it.

Growing up around dogs and riding horses, Pratt is equally passionate about defending animals. She’s proud to be in PETA’s “Be Nice to Bunnies” iPhone shopping application, enabling consumers to verify cruelty-free products before purchasing.

Like many living in the City of Angels, she finds herself often disappointed when meeting celebrities and professional athletes. Maybe she’ll marry, maybe she won’t. Pratt is hesitant to declare any long-term goals, living by the motto – “I’ve been told when we make plans, God laughs at us.” Pensively she declares hopes to maintain designing, but finally replies, “If I have a hand in putting an end to puppy mills, I think I’ll have done my job.”

Relaxing on the couch with her Uggs and a Danish pastry after the shoot, she engages naturally with the Runway editor-in-chief and staff. It’s safe to say, Stephanie Pratt is capable of more than just a smile.