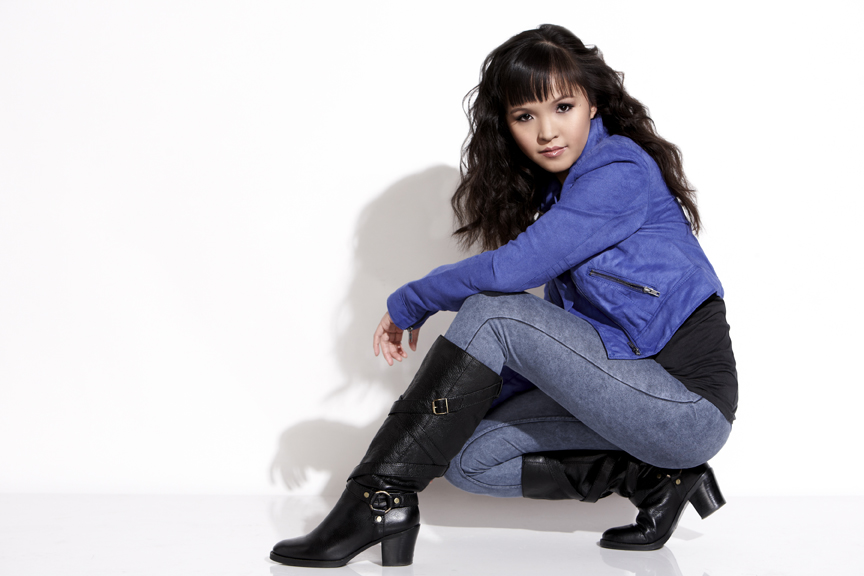 What was the set of Disney’s “Aaron Stone” like? The set is mostly super hi-tech stuff. For example, we have Aaron’s Super Sonic Jet, Dark Tamara/Emma’s lab which consists of futuristic weapons, robots and computers, Mr. Hall’s prison cell, and many other cool places.

Where were you filming at? In Toronto, Canada

What is your favorite thing in your closet? My comfy pajamas

Who are your favorite designers? Stella McCartney, Natalie Portman and Massiel Bueno’s OgieKanogie

What do you do to have fun? Play video games with my friends, try different kinds of vegetarian food, play the drums, bike along the beach, and if I have to I’ll go shopping!

Do you have any pets? Yes, I have two cats who I love very much. They help me with all my auditions- I pretend that they are the other actors hahaha. But I may have a 3rd cat soon. A couple nights ago, I found a kitten outside my front door. He is so small and cute that I figured he must belong to someone so I posted some signs around the neighborhood. If no one ends up claiming him, I think I will just have to keep him!

Where did you grow up? I grew up in Java, Indonesia, in a small suburb about a five-hour drive from the capital city of Jakarta. My parents and lots of my friends are still there and I miss them very much.

What was growing up there like? Growing up in Indonesia was pretty exciting because I have really cool parents who never asked me to do any chores, so I had it made!! Everyday after school I just hung out with all my friends and played until dark. And being that I love food, sometimes we’d go and eat Indonesian food from the myriad of street vendors and then hit the Boba tea places- I love Boba! Then I would force myself to study a little- that is when I wasn’t sleepy!

What are your plans for the future? To continue working in film and TV while also exploring more of the production side of the business. Last year I started my own company and produced a short film called “Unconditionally.” It was a very satisfying experience as an actor, and I’d call it an exhilarating experience as a producer. I’m definitely addicted to the energy of arranging all the elements that make a film come together, like locations, crew members, equipment, casting, and yes- finding good catering!!

What is your favorite movie and why? I like both “Notting Hill” and “The GodFather”. Opposite ends of the spectrum I know, but it’s hard to choose just one. I love “Notting Hill “ because every time I watch it, I just feel good, cause its such a funny and uplifting story with so many wonderful characters and actors. And who doesn’t like “The GodFather” right? And while obviously it’s not a “feel good movie,” I’m drawn to it for the similar reasons of amazing characters and a brilliantly told story. The 1st and 2nd ones are so awesome! I think I’ve watched both movies at least 20 times each.

Who are your influences? Ester Hicks, Kate Winslet, Michael Beckwith, Leonardo DiCaprio, my cats (haha) and my best friend.

Where did you learn to perform? Well, I sort of fell into it by going to an open audition for a Disneyland commercial at the urging of a friend. I didn’t really know what an audition was, but I somehow ended up booking the part! I just had so much fun at both the audition and the shoot that I instantly caught the acting bug. From there I took a few acting classes in LA and just kept searching out opportunities to have fun and perform.

What can you tell Runway that the rest of the world doesn’t know? I’m a little high-maintenance when it comes to ordering my fav Starbucks drink. While I change it up every six months or so, at the moment I like a tall soy, unsweetened, green tea latte with only one scoop of the green tea powder, and no foam. OMG.