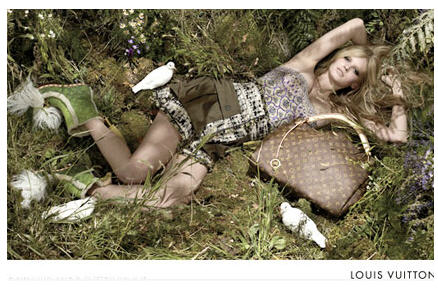 Lara Stone First discovered in the Paris Metro at the age of 12, Lara Stone evolved into a prime pick for ad campaigns after signing with IMG in 2006. This 27-year-old Netherlands native is a favorite of French Vogue, and replaced Kate Moss as the face of Calvin Klein Jeans in 2007. At almost 5’10”, this blonde blue-eyed bombshell has also had contracts with Just Cavalli, Givenchy and H&M with Alexi Lubomirski. Named “Fashion’s It Girl” by W Magazine in 2009, she recently has graced the covers of British and Italian Vogue, and has been involved with Louis Vuitton, Jean Paul Gautier and Jaeger campaigns.

Iris Strubegger This Austrian beauty is known for her sculpted cheekbones, brown hair and striking blue eyes. At 5’11”, Strubegger is one of the most wanted girls for runway and designers at this moment. After signing with Supreme Management in 2007, she has walked runways for Dolce & Gabbana, Marc Jacobs, Louis Vuitton, Alexander McQueen and Cynthia Rowley. She has also been recognized as the face of Balenciago, Givenchy and Valentino. Most recently, she has graced the pages of Spanish, Italian and Japanese Vogue, and been a part of Valentino, Givenchy, Barneys and Pepe Jeans campaigns.

Natasha Poly Natasha Poly (given name Natasha Polevshchikova) hails from Russia and stands a slinky 5’10”. Modeling since 2000, she works through the agencies Women and Select Model Management. She is currently or has been the face of numerous campaigns including Gucci, Nine West, Ralph Lauren, Missoni and Jil Sander. This 24-year-old blonde is known for her ability to transform her facial expressions, her green eyes, and a recognizable runway walk and signature pose. She has recently been featured on the cover of Russian Vogue, in Italian Vogue editorials, and walked the runways for Anna Sui, Michael Kors, Pucci, Givenchy and Armani Prive.

Maryna Linchuk This blue-eyed Belarusian is known for her signature pout and as the face of Kenneth Cole and Christian Dior fragrances. After signing with DNA Models in 2006, the 22-year-old Linchuk has walked runways for Christian Lacroix, Ralph Lauren, Victoria’s Secret, Gucci, Hermes, Valentino, Christian Dior, John Galliano and Stella McCartney to name a few. In 2008, Russian Vogue featured this 5’11” brunette as a top model. Recently, she has appeared in Allure, Harper’s Bazaar, French and Chinese Vogue.

Toni Garrn A mystery in the modeling world, this 5’11” blue-eyed German opened and closed the SS08 Calvin Klein show, an exciting occurrence that hasn’t happened since the days of Natalia Vodianova. After that she skipped Milan and Paris, surprisingly. Signed with Women Management since 2007, at 18-yearsold Garrn has walked the runways of Donna Karan, Tommy Hilfiger, Etro, Bottega Veneta, Fendi, Christian Dior, Chanel and Armani Prive. Most recently, she was featured on the covers of German, Italian and Russian Vogue and was signed as the face of Fendi and Hugo Boss.

Sean O’Pry Discovered by “America’s Next Top Model” judge (as well as Runway’s Fashion Director) Nole Marin, this blue-eyed brunette is known for his chiseled cheekbones and lips that resemble a Renaissance statue. O’Pry was rated by Forbes Magazine as the world’s top male model not even a year ago, and this 21-year-old American has had a rapid ascent into the industry that has been nothing short of spectacular. Since 2006 he’s been signed with VNY Management, and has walked runways for Diesel, Lacoste and Marc Jacobs. Not only was he named GQ Style’s 2007 “Man for the Season,” but he’s recognized as a face of Calvin Klein, Gianfranco Ferre, Giorgio Armani and most recently, Bottega Veneta.

Ollie Edwards The new face of Giorgio Armani (replacing Sean O’Pry) is expected to rise to stardom in the next couple of months. Hailing from England, 27-year-old Edwards is known for his exceptional skin, and his balance of bad boy (avid motorcross rider) and good boy (charming and polite in person) energy. At 6’1”, he is on board with FM Agency, and represents a mature demographic in advertising campaigns. This blue-eyed brunette has recently worked with Jones New York, Lacoste, Armani Jeans and Ralph Lauren.

William Eustace Discovered at the age of 16 while out in London, three years later Eustace is a coveted choice for this season’s campaigns. Lanvin, Barneys and Calvin Klein, along with about 15 other top menswear brands are just some of the champions of this new rising face with baby blues. So far in his modeling career, he has consistently shown a solid body of work. Represented by VNY, this brunette is 3/4 English and 1/4 Irish, and stands 6’1/2”. Danny Schwarz This 23-year-old has been signed with VNY Management since 2008. With his soft brown hair and sharp green eyes, this Englishman’s rapid rise in his first season consisted of four campaigns (three of them with Meisel) and has made him in high demand in the fashion world. In just the short years he’s been on the map, Schwarz has walked runway for Bottega Veneta, Dolce & Gabbana, Just Cavalli, Tommy Hilfiger, DSquared2 and Versace. In 2009, Forbes ranked Schwarz as the world’s fourth top male model. He’s also recognized as the face for Missoni, and models for Calvin Klein Jeans commercials.

Carson Parker This American with North Carolina roots dominates the runway as a current favorite of Meisel. Parker, with his sandy chocolate hair and green eyes, is a natural fit at Ford since modeling seems to be a family tradition for him (his uncle and aunt have both modeled). At 6’2”, he has walked the runway for Louis Vuitton and YSL, and has also been working with CK Jeans, CK White Label and Victorinox. This 25-year-old is ready to take the industry by storm. Watch for him to blossom into a must-book model for runway and print this spring and summer season with his Calvin Klein Euphoria Fragrance campaign