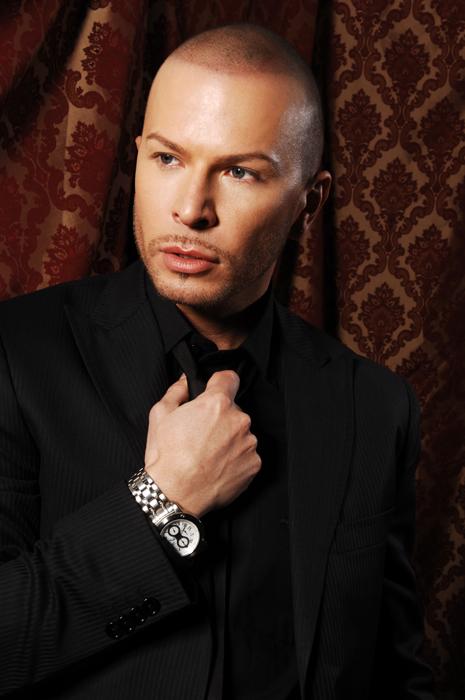 Meet, Russian singing sensation George Hodos, who has made his mark on the music industry in a short period of time. From his fashion sense to his amazing singing talents, George is one artist you need to watch in 2010.

George found success with his debut album, which was aptly titled “The Voice.” George’s single, “Where Do I Go” helped him skyrocket to the top of the Russian charts making him a household name in his native country. Now George has aimed his sites on the United States with the release of his new album “George Hodos- Just A Man.” George’s first single off his album, “Just A Man” featuring Snoop Dogg which will be released May 4th, has already topped radio charts appearing on Billboard’s Mike Bordes Sprint Radio Alltel Playlist, Nextmusic Charts, and is currently #32 on Billboards Promo-only Chart.

We got to chat with this music genius to discuss his personal style, favorite designers, and how his music and style go hand in hand.

What would you say is your personal fashion style?
It’s elegant but simple! My style consists of mostly soft colors such as black, beiges, and blues. I like high quality fabric and generally not with too much detail, so to say. I never want my clothes to cover my personality, I want my clothes help express my personality.

How does your music influence your fashion style?
They complement one another. If you ask me to describe my music, I would use almost the same words as I use to describe my style: simple and elegant with a soft colors, very high quality production and a lot of expression.

Who are your favorite designers and why?
Armani. He has great style and perfect taste. His collections never scream, but instead they tell a story. I also love the Russian designer, Sergey Soroka. He used to be my personal stylist for many years. His style is close to Armani but a little less conservative when it comes to the clothes he wants me to wear on stage. Sergey really knows how to work with colors and always knows which colors complement each person. Clothes are a special language for me. Clothes help us to connect with the world and create a beauty every day.