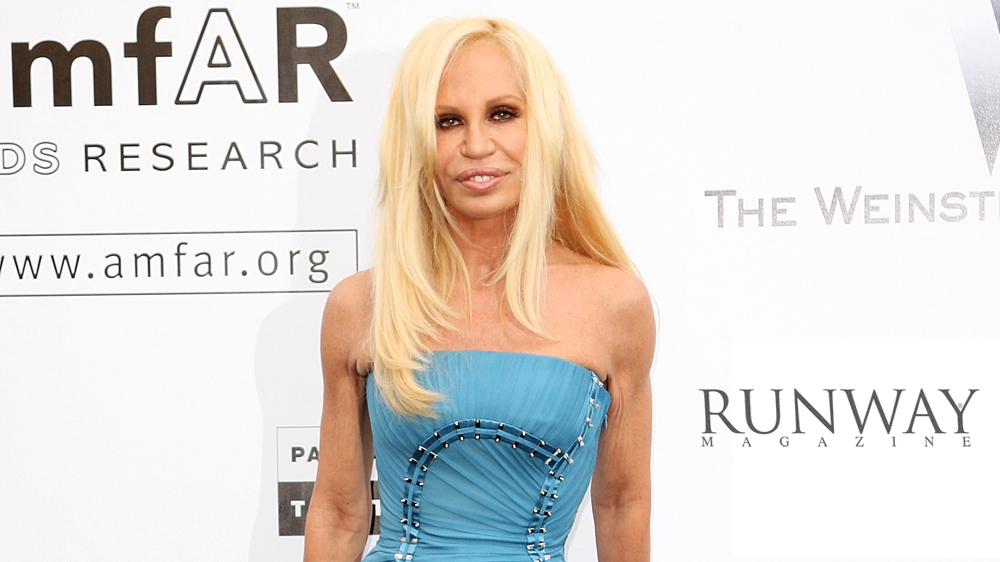 Bold, sexy, sleek; these are but a few words that describe the new line of Versace, but the words could easily be used to describe the woman behind the name. To say that Donatella Versace is a force to be reckoned with is an understatement, and this strong and talented designer has weathered a number of storms throughout her illustrious career.

Born May 2, 1955 in Reggio di Calabria, Italy, Donatella was the youngest of four and the daughter of a personal financier and dressmaker. While she may have been the youngest child in her family, she was definitely not the meekest. In fact, the designer was often referred to as a wild child, and she can accredit this to her older brother Gianni Versace, who brought out this side of her.

And it was that older brother that brought Donatella Versace into the world of fashion in the 1970’s. After attending Florence University, Donatella Versace joined her brother’s design house and began working for him in public relations. Although she was behind the scenes for much of the 1970’s, Gianni Versace often referred to the blonde-haired designer as his muse and even dedicated his perfume, “Blonde”, to his younger sister.

In the 1980’s, Donatella Versace moved into the mode of being a fashion designer and was given her first diffusion label by Gianni, the Versus label, which remains a well-known line in the Versace house to this date. There was little doubt that Donatella Versace was graced with an amazing sense of style and an innovativeness that helped launch the Versace name and kept it strong in the fashion industry for decades. In fact, Donatella Versace introduced the idea of using well-known models on the catwalk shows in the effort to increase the press coverage of their runway shows. Her idea was a success and since then, the Versace label has been associated with a number of celebrities including Jennifer Lopez, Madonna and Elizabeth Hurley.

While there has been much success for Donatella Versace and the fashion house, there is a private side to the designer which is shadowed by many hardships. Donatella married American fashion model Paul Beck in 1987, and the couple had two children, Allegra and Daniel, before they divorced.

In the late 1990’s, tragedy struck the Versace family when Gianni Versace was murdered in front of his Miami home. While some were expecting the collapse of the Versace fashion house, Donatella left the public eye with her family and retreated to the Caribbean in an effort to mourn the loss of a cherished brother and uncle.

By the summer of 1998, a year after her brother’s death, Donatella was once again in the public eye. After deciding to not only save but also revitalize the Versace label, she launched her first collection for Versace Atelier. The show itself was a huge success, and it continued to prove that Versace was still a prominent name in the fashion world.

With the launch of her first collection, Donatella Versace continued to build on the house of Versace. She still followed the same styles that exuded sex and glamour while continuing to bring a modern edge to the design house that can be seen in the fall/winter 2009 styles. Pure colors are still the signature of the house, with black and white being used for the customary impact along with a number of vibrant colors.

The lines continue to be straight and completely feminine. The notable quote of Donatella Versace is seen everywhere in the new face of Versace, “My inspiration is still rock 41

In addition, Donatella Versace took the company into unchartered waters, branching into the world of luxury hotels. The first hotel, Palazzo Versace on the Gold Coast of Australia, opened its doors in 2000 and since then, there have been plans for several more hotels to add to the already prosperous brand.

Despite the success of the brand’s many ventures, Donatella has still maintained many of the friendships with celebrities that have made the line such a success over the years. She has currently teamed up with January Jones from “Mad Men” to be the current face of Versace for the new launch, which is scheduled for September 25, 2009. The line itself is captivating and very reminiscent of what you would expect from the Versace label with patent leather, pure colors in a range of shades from signature black and white to dark purple and blues, with tight, straight lines. However, Donatella has also added a softer side to the line with flowing sheer fabrics and softer edges.

In addition to the line, Donatella still takes the opportunity to donate her time and the Versace name and is involved in the Art Unites, which is a collaboration with the Whitney Museum of American Art’s education department. Through this project, children are encouraged to create drawings, which will be appearing on Versace tote bags and are available at Versace boutiques with 100 percent of the proceeds going towards the charity.

Today, Donatella Versace’s collections celebrate the sexual nature of woman. The lines exemplify the curves and beauty of a woman’s form, and her attention to detail combined with her drive for perfection has seen the label continue to be a viable product, even in today’s economy.

She continues to surprise and delight, and her designs can be seen on and off the red carpet, proving yet again that sensuality laced with a touch of rebellion is still a hot commodity in today’s fashion world.

You can also follow the launch of the new face of Versace and roll, but now it’s lady rock and roll. The look is more refined and more glamorous,” she said to Reuters.

However, the fashion designer did not feel constrained in the world of couture and has catapulted Versace into a cult brand that has many different branches including its fashion house, fashion accessories and home furnishings. She launched her own fragrance, “Versace Woman”, in February 2001 and has had continued success with public relations for the company.