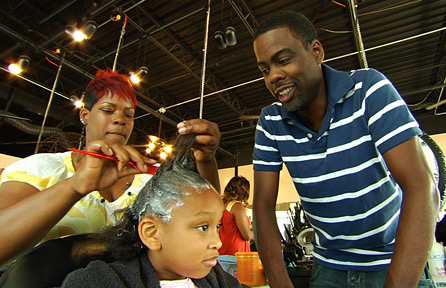 The 411: An exposé of “comic proportions” that only Chris Rock could pull off! GOOD HAIR visits beauty salons and hairstyling battles, scientific laboratories and Indian temples to explore the way hairstyles impact the activities, pocketbooks, sexual relationships, and self-esteem of the black community.

The Good: When one of Chris Rock’s young daughters asked, “Daddy, how come I don’t have good hair?,” the comedian decided to investigate the complex, often troubled relationship between African-American women and their crowning glory. He had no idea what he was in for.! The thing is, Chris Rock is not the only one that gets a “full access pass” into the hair and hairstyles of African American women. I was as surprised as he was to discover the behind the scenes of hair. The movie/documentary has a few scenes that are really funny. Such as when he was at the hair show and a black man says he likes white women more than blacks.

The Bad: What it doesn’t do is offer a relevant analysis of why black women relax their hair or wear hair extensions. Also, $1000 for a weave?? I can understand some of the actors etc in the movie spending that much but why on earth would a women in a working class neighboorhood spend her rent on hair?

The Last Word: They missed a few things. One thing I heard while watching the press roundtable later on is white women go through the same exact problems but this was never broached in the film.

Theater, DVD, or Cable in a few years: I think you can wait until it hits DVD or Cable.