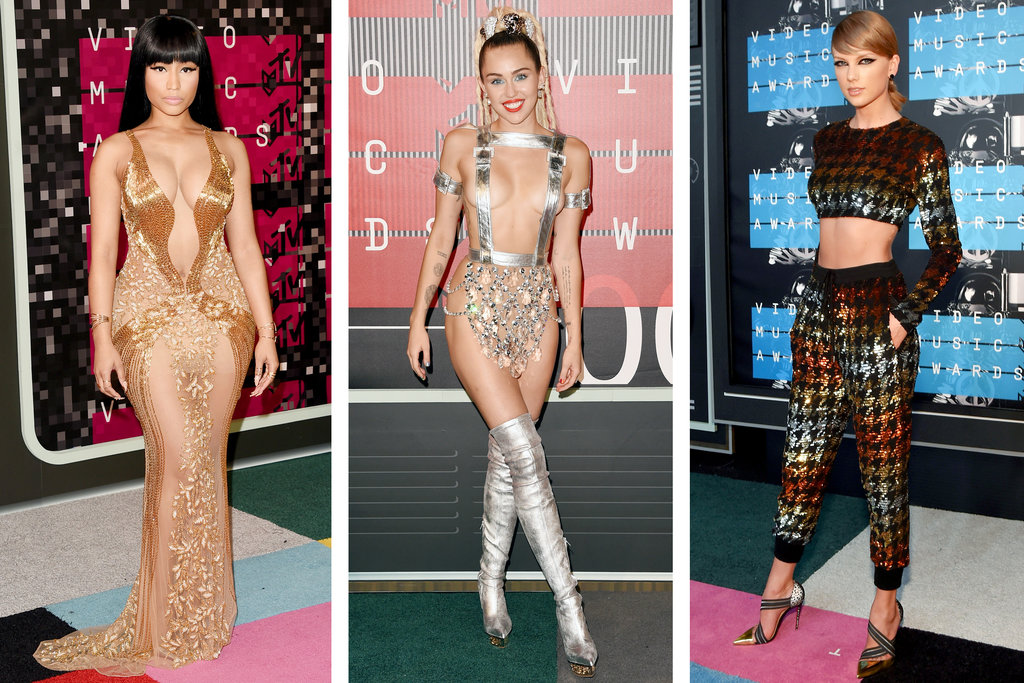 Though it is a tenet of contemporary pop culture that fashion is a crucial component of pretty much every awards show under the sun, the MTV Video Music Awards on Sunday proved an exception to the rule.

There were lots of memorable moments, from Taylor Swift and her cool girl entourage (high school, we can’t escape you) to Kanye West’s 2020 presidential declaration, Justin Bieber’s emotional comeback and Nicki Minaj’s calling out of Miley Cyrus, the host. But fashion — which is to say runway-ready garments with some level of carefully calibrated aesthetic ambition — didn’t provide any of them. The designer Jeremy Scott may have been the creative director of the evening, but the emphasis was on costume, and clothes.Indeed, the recent movement toward being naked-while-clothed, begun by Beyoncé and Jennifer Lopez at the Met Gala, was the single biggest trend of the night among the female attendees — whether it was Ms. Minaj in her sheer gold mermaid gown with strategically placed beading by La Bourgeoisie, or Britney Spears in her cut-out metallic gold ultramini, or Chrissy Teigen in her sheer black Marchesa with strategically placed ruffles, or FKA twigs in her sheer corseted Atelier Versace with strategically worn undergarments. (You get the idea.)

If Barely There Black Tie was the unofficial dress code for women, Barely Bothered was the dress code for men, including Mr. West in baggy T-shirt and matching sweats, Big Sean in shredded denim jacket and Pharrell Williams in more denim. The exception was Nick Jonas, head to toe in brown Versace leather.

It was all so extreme, one way or another, that when someone showed up in actual Vogue-like fashion, they looked … well, dull by comparison.

The brand names that stuck out did so because their looks were way off their signature style zone: Vera Wang, for example, who made Rita Ora’s lavishly feathered black skirt and peekaboo top, which transformed Ms. Ora into nothing so much as a provocative ostrich, and Atelier Versace, which created three looks for Ms. Cyrus.

To be specific: the jeweled apron-and-silver-strap — you couldn’t really call it a dress; body accessory, maybe? — that Ms. Cyrus wore on the red carpet; the Pepto-Bismol pink lamé pants and matching pasties; and the white cut-away milkmaid-in-space mini-dress that she wore during the broadcast.

They were very Miley, but also totally unlike anything I have seen in a recent Versace collection. In fact, I’d never have guessed the designer if I hadn’t received an email from its office claiming credit.