Home FASHION The Breakdown: Textiles and the Making of a Garment 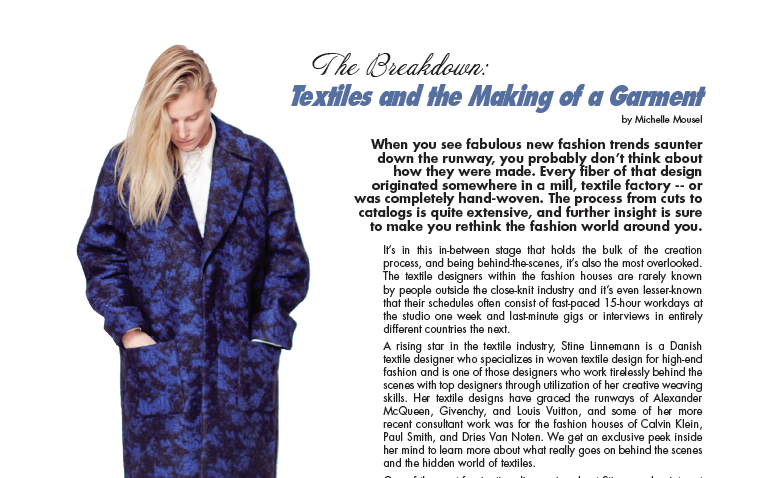 When you see fabulous new fashion trends saunter down the runway, you probably don’t think about how they were made. Every fiber of that design originated somewhere in a mill, textile factory — or was completely hand-woven. The process from cuts to catalogs is quite extensive, and further insight is sure to make you rethink the fashion world around you.

It’s in this in-between stage that holds the bulk of the creation process, and being behind-the-scenes, it’s also the most overlooked. The textile designers within the fashion houses are rarely known by people outside the close-knit industry and it’s even lesser-known that their schedules often consist of fast-paced 15-hour workdays at the studio one week and last-minute gigs or interviews in entirely different countries the next.

A rising star in the textile industry, Stine Linnemann is a Danish textile designer who specializes in woven textile design for high-end fashion and is one of those designers who work tirelessly behind the scenes with top designers through utilization of her creative weaving skills. Her textile designs have graced the runways of Alexander McQueen, Givenchy, and Louis Vuitton, and some of her more recent consultant work was for the fashion houses of Calvin Klein, Paul Smith, and Dries Van Noten. We get an exclusive peek inside her mind to learn more about what really goes on behind the scenes and the hidden world of textiles.

One of the most fascinating discoveries about Stine was her interest in weaving at such a young age. At seven years old, with no prior experience or knowledge, she weaved a basic grid structure out of palm leaves she found in the garden at her home in Hawaii. This would turn out to be the first of many introductions to the world of weaving and textiles. Over the years, a series of instructors and classes would hone her skills, including acceptance and completion at the prestigious Royal Danish Academy of Design in Copenhagen and graduating with an MA from the top design school in the world, the Royal College of Art in London.

Many aspiring fashion designers dream of their creations coming to life on the shoulders of a professional fashion model or A-list actress, but rarely do they know that before the garment even reaches the stage – or your closet – it undergoes an extensive process of creation. Once a design is sketched out on paper in great detail, the fabric, texture, and overall aesthetic must be carefully considered before any further progress can be made. This stage alone can take weeks or months for a decision to be mulled over, of which it often undergoes several revisions.

In many circumstances, the designers may work closely alongside their team to create the perfect fabric, or receive outside pitches of pre-made samples to better curb their decision. These samples are referred to as swatches, which can be used to directly or indirectly influence the fabric development process.

Once the swatches are selected, a series of textiles will be made from their design and then pieced together to make a rough-cut amalgamation. If the designer is happy with the rough draft, all the embellishments will be added and the team will continue to refine the garment until a fully completed outfit is ready for show.

Upon graduating with her BA, Stine realized she was thrust into the fast-paced world of high fashion when her first paid assignment for Alexander McQueen was also her most challenging. She was tasked to design and create a series of textiles, but without a loom for her to use, she had to improvise. She remembers staying up late watching badly filmed videos of elderly women doing backstrap weaving to better learn her craft. Within the next two weeks she had built looms herself and guided a team of interns through a process of intense weaving that consisted of making yarn from cutting strips of fabric and sowing them together, cutting the fur with a special fur knife and sewing everything together to create fur “yarns.” The end result was two fully hand-woven garments walking down the runway in Paris for Alexander McQueen’s A/W 2011 collection. For Stine this was well worth the effort, seeing her work realized in the most prestigious fashion week in the world.

Next, Stine received a sponsorship with Danish fur company Saga Furs, where she created and developed a special technique for making a sort of fur yarn by combining several types of fur with a furworking method that allowed her to spin them together to form stunning “cords” of fur. She then weaved these into much larger hand-woven fabrics that were then lent out and shown to several high-profile clients, one being Givenchy, who immediately requested she do a special version of this design exclusively for them. Her hand-woven designs inspired two of their main garments of the A/W 2014 season.

The amount of success that Stine has achieved so far in her short career is impressive, and she states that working with Paul Smith or Louis Vuitton Menswear were her most favorites. She has experienced the incredibly demanding world of fashion at a pace that staggers most people and continues to press forward, thriving on the stress and rigor of each job. Because of the split-second rarity of opportunities, she’s found that it’s best to take every opportunity that knocks, and that it’s incredibly normal to have to accommodate very tight deadlines, as “fashion houses always want it yesterday,” she muses. Still, with a resume that fascinating, the textile industry remains relatively obscured, so she has begun to establish her own self-titled textile brand in Copenhagen, which will cater to high-end fashion clients and interior companies worldwide.

A rising star hidden behind a cloud of industry obscurity, Stine Linnemann proves hard work, persistence, and patience do pay off, and with a bit of luck, she’s quickly making a name for herself in a booming industry. After learning firsthand how much work goes into each piece on the Fashion Week runways, one can muse that each garment truly is a work of art, touched by the hands of many artists across a wide range of aesthetic designs.