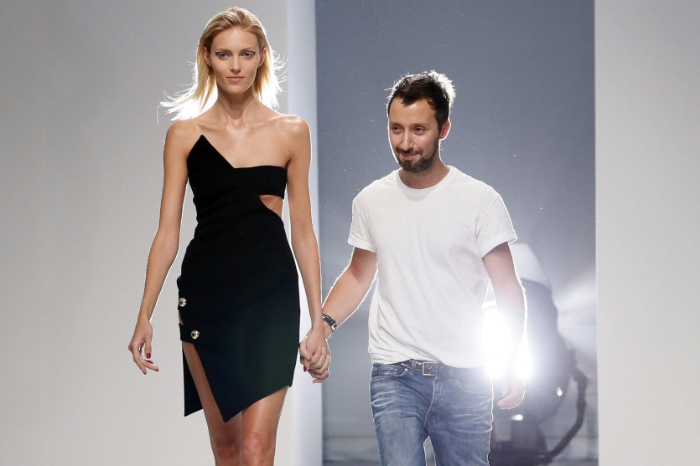 Following months of rumors, Yves Saint Laurent’s parent company, Kering, has confirmed that Anthony Vaccarello has been appointed to serve as the house’s creative director now that Hedi Slimane has stepped down. Vaccarello, 36, starts at the French fashion house today and will show his first collection in October, owner Kering SA said in a statement Monday.

François-Henri Pinault, chairman and CEO of Kering, added: “I am very proud to welcome such a vivid and young force among today’s creative fashion talents to Yves Saint Laurent. Anthony Vaccarello’s unique style will greatly express the maison’s creative signature and fashion authority, building on the brand’s solid foundations, and further developing it to realise its full potential. Together with the entire Yves Saint Laurent team, Anthony Vaccarello will strongly contribute to the maison’s growing accomplishments.”

Per Bloomberg, Vacccarello has big shoes to fill as Slimane almost tripled sales in four years atop Saint Laurent, Kering’s fastest-growing brand. The owner of Gucci has now replaced creative chiefs at three of its four biggest brands in the past year, as well as at suitmaker Brioni. The changes come as luxury demand slows and rivals such as Burberry Group Plc seek to speed up delivery, making collections available for purchase immediately after they’re revealed.

Vaccarello is an Italian-Belgian fashion designer. A graduate of La Cambre, the renowned architecture and visual arts school in Brussels, Vaccarello, who initially intended to work as a sculptor, caught Karl Lagerfeld’s eye after winning the Hyères International Festival of Fashion and Photography prize in 2006. Thereafter, he worked at Milan-based Fendi, alongside Lagerfeld until 2008 when he left to launched his own label in Paris.

In January 2009, directly after the couture shows, Vaccarello presented his debut eponymous ready-to-wear collection in Paris. From early on, he honed his signature aesthetic of comprised of leather and organza miniskirts, and thigh-high slits. Per Vogue Paris: “Praised by the fashion pack, including the model Lou Doillon, who became the face of the label’s Fall/Winter 2010 collection, the designer was immediately praised by critics for the purity and subtlety of his collections.”

And since then, he’s been on the rise. In 2011, he won the prestigious Association Nationale pour le Developpement des Arts de la Mode, or ANDAM fashion award. Thereafter, in September 2014, he made his debut as Donatella Versace’s latest protégé by way of a capsule collection for the famed Italian design house’s edgy Versus collection. He was named as the creative director of Versus Versace less than half a year later, following in the big footsteps of Christopher Kane and Jonathan Anderson.

Speaking of his signature diagonally sliced miniskirts and a shrunken leather jackets, Vaccarello says: “When I’m working, I’m making clothes around the body. I’m more about the draping, and finding the right line. Maybe because I’m half-Italian and half-Belgian, I strive for both a kind of sensuality and a control and construction. It’s sexy because the girl is wearing the dress. It’s not my first goal when I’m making the collection.”